Initial coin offerings should be subject to securities laws, Friedman said Friday at a conference in New York hosted by the MIT Sloan School of Management. She said retail buyers deserve protection if they are to invest in the products. Moynihan warned that digital currencies could be used illicitly.

“The idea of anonymous currencies just never turned out to be a good thing,” Moynihan told the conference. “You have a real potential risk.” Higher-denomination bills don’t exist partly because of concern they could be used to move large sums of illicit money, he said. Yet digital currencies could fill that gap if they offer their users anonymity.

Wall Street leaders have diverged over whether to embrace cryptocurrencies as innovations or rein them in as threats to the global financial system. While Bank of America has largely eschewed bitcoin, declining earlier this year to assist with certain investments for customers, competitors such as Goldman Sachs Group Inc. have shown an interest in handling client trades.

Initial coin offerings, in which ventures sell their own tokens to fund or facilitate their business, have prompted repeated warnings by US regulators that many tokens may amount to unregistered securities and could burn buyers. Securities and exchange commission chairman Jay Clayton has said he’s been shocked to see how much fraud is occurring in that space. Bloomberg

It’s not just private companies’ websites falling victim to cryptocurrency mining hijacks. Security consultant Scott Helme and the Register have discovered that intruders compromised over 4,200 sites with Coinhive’s notorious Monero miner, many of the government websites from around the world. This includes the US court info system, the UK’s National Health Service, and Australian legislatures, among others. The intruders spread their JavaScript code by modifying an accessibility plugin for the blind, Texthelp’s Browsealoud, to inject the miner wherever Browsealoud was in use.

The mining only took place for several hours on February 11th before Texthelp disabled the plugin to investigate. Government sites like the UK’s Information Commissioner’s Office also took pages down in response. As with most of these injections, your system wasn’t facing a security risk — you would have just noticed your system bogging down while searching for government info. The mining goes away the moment you visit another page or close the browser tab. The biggest hassle was for the site operators, who are now discovering that their sites are vulnerable to intruders slipping in rogue code without verification.

It’s not certain who’s behind the attempt, but these hijacks tend to be the work of criminals hoping to make a fast profit.

The big problem: this might continue to happen for a while. Although antivirus tools can catch Coinhive, a more definitive solution would be to use a fingerprinting technique (subresource integrity) that verifies of outside code and blocks any modifications. And there’s no indication that many websites, whether government or private, are in a rush to implement it.

January’s cryptocurrency selloff got fresh impetus on Tuesday when Bitcoin slumped as much as 20%, as the prospect of regulatory crackdowns appeared to spread.

While the largest digital coin trimmed its loss and was down 13% at $12,146 as of 8:28 a.m. in New York, it was still at the lowest level since late December, according to composite pricing on Bloomberg. As Bitcoin halted its two-day rally, rival cryptocurrencies also tumbled. Ripple sank as much as 33% and ethereum dropped 24% before both tokens pared some declines. 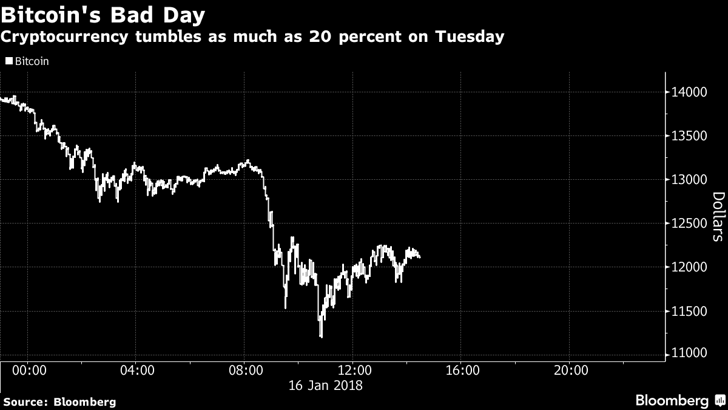 Speculators across the globe are struggling to determine when or how market watchdogs may rein in an industry that’s decentralized and derives much of its value from anonymous ownership. Many assertions that digital coins represent a bubble have triggered double-digit selloffs over the past year, only to be followed by rebounds.

In South Korea, shutting down cryptocurrency exchanges is still an option, Finance Minister Kim Dong-Yeon said in an interview with TBS radio. But measures first need “serious” discussion among ministries, Kim added, holding out hope for traders that a crackdown won’t go that far. Kim said there’s irrational speculation and that rational regulation was needed. 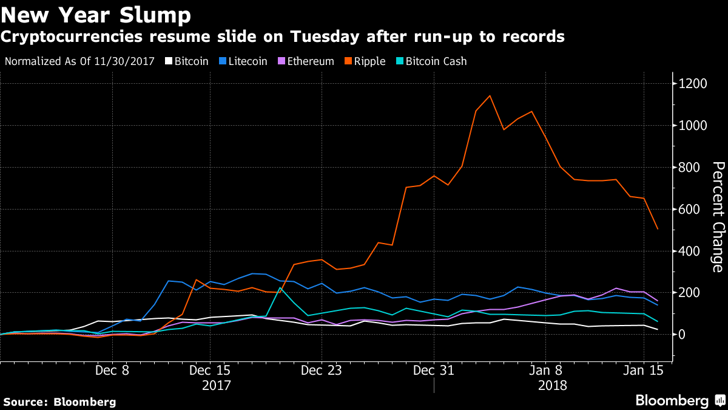 China, which first began targeting the industry last year, is escalating its clampdown on cryptocurrency trading, particularly online platforms and mobile apps that offer exchange-like services, according to people familiar with the matter.

“We’ve heard reports that South Korea, China and Japan have considered a shared approach, a path, to regulation,” ETX’s Wilson said, also citing a challenge to digital coins from a bill in the U.S Senate. “It looks like the light touch that has allowed the crypto-boom to explode may be coming to an end,” he wrote in a note to investors.

Lower-than-normal trading in Korea and Japan may have exaggerated the moves in Asia hours on Tuesday, said Mati Greenspan, a senior market analyst for the eToro currency platform.

Bitcoin trading using the Korean won was about 3.3% of the total among major currencies, compared with more than 10% reached on several days over the past two weeks, according to cryptocompare.com data.

Steven Maijoor, chairman of the European Securities and Markets Authority, said investors “should be prepared to lose all their money” in Bitcoin, in a Bloomberg TV interview in Hong Kong. “It has an extremely volatile value, which undermines its use as a currency,” he said. “It’s also not broadly accepted.”

The ESMA warned retail investors against initial coin offerings in November and is monitoring developments in cryptocurrencies, Maijoor said.

Over the weekend, it was China’s central bank. Then, on Tuesday (Dec. 05), the Reserve Bank of India (RBI) warned investors against betting on bitcoin and other cryptocurrencies.

“So there’s only one thing we can do—watch it from the bank of a river,” Pan Gongsheng, deputy governor of the People’s Bank of China, said at an event in Shanghai. “One day you’ll see bitcoin’s dead body float away in front of you.”

The Indian central bank, however, was more straightforward, “…cautioning users, holders and traders of virtual currencies (VCs), including Bitcoins regarding the potential economic, financial, operational, legal, customer protection, and security-related risks associated in dealing with such VCs.” The RBI’s Dec. 05 release reiterated the concerns it had raised twice before in December 2013 and February 2017.

In fact, measures to curb the use of cryptocurrencies have been gaining momentum across Asia. The central banks of Indonesia and Bangladesh have even barred the use of bitcoin as a payment tool. In September, China shut down bitcoin exchanges and banned initial coin offerings.

Other regions, too, have raised red flags. On Nov. 29, the vice-president of theEuropean Central Bank warned against investing in bitcoin at such high prices. The governor of the Bank of France cautioned against its potential hazards, as did Russian president Vladimir Putin and Germany’s central bank.

In India, besides the RBI, the government, too, has made public its discomfort with bitcoins.

On Nov. 30, finance minister Arun Jaitley said India does not recognise virtual currency as legal tender. Earlier this year, a committee set up by his ministry had reportedly recommended banning cryptocurrencies over fears that they could be used to launder money and perpetuate frauds.

“If India had to ban virtual currencies, they would have done that by now. In the last three years, the RBI’s statement has been the same: They are uncomfortable with it and people should invest at their own risk,” Vivek Steve Francis, CEO of Coinome, a cryptocurrency-trading exchange told Quartz late last month.

THE price of bitcoin surged through $US10,000 ($13,200) on Wednesday, adding to its tenfold jump in value this year and fuelling a debate as to whether the virtual currency is gaining mainstream acceptance or is merely a bubble waiting to burst.

But as soon as bitcoin went through $US10,000, it surged past $US11,000, only to plummet from those lofty levels. The cost of buying one bitcoin as measured by the website Coindesk was hovering around $US9,800, and was as low as $US9,300 on Wednesday afternoon. A price of one bitcoin had been roughly $US1,000 at the beginning of the year.

The steep rise in the price of bitcoin and other virtual currencies this year has divided the financial community on their merits and whether — or when — the value might come crashing back down.

The CEO of JPMorgan Chase has called bitcoin a “fraud,” as it is not based on anything other than software code and is not backed by any monetary authority. Other executives, including International Monetary Fund chief Christine Lagarde, say virtual currencies should not be dismissed and could have useful applications, such as a means of payment in countries with unstable currencies.

Some countries, like China, have tried to stifle bitcoin exchanges. But in a move that gave further credibility to the virtual currency, the US exchange operator CME Group said last month that it plans to open a futures market for the currency before the end of the year, if it can get approval from regulators.

Bitcoin was created about a decade ago as an alternative to government-issued currencies. Transactions allow anonymity, which has made it popular with people who want to keep their financial activity, and their identities, private.

The digital coins are created by so-called “miners”, who operate computer farms that verify other users’ transactions by solving complex mathematical puzzles. These miners receive bitcoin in exchange. Bitcoin can be converted to cash when deposited into accounts at prices set in online trading.

Whereas virtual currencies were initially used primarily as a method of payment, in recent months they have become a hot investment among speculators. Warwick Business School assistant professor, Daniele Bianchi, says that the price increases are due to rising demand but also to the fact that the supply of bitcoins is kept fixed. There are currently only 21 million that can be mined in total.

Bianchi also noted that trading in bitcoin is becoming more professional and open to the general public. He believes virtual currencies are “here to stay” and expects the price to rise higher still.

“The increasing demand pressure from investors and speculators makes the case for an even further increase in bitcoin prices in the near future,” he said. Others are far more sceptical.

Neil Wilson, a senior market analyst at ETX Capital in London, says bitcoin is “following the playbook for a speculative bubble to the letter”.

A new market enjoys a boom when professional investors start entering the market. That’s followed by euphoria as others rush in to partake in the gains. Wilson says bitcoin could rise a lot further, but says it is merely a question of when, not if, the bubble bursts.

“This sort of thing never, ever lasts,” he said.

MSCI’s broadest index of Asia-Pacific shares outside Japan was down 0.16 per cent.

“The decline by U.S. equities led by energy shares is having a knock-on effect, dampening sentiment in sectors related to energy and industry,” said Masahiro Ichikawa, senior strategist at Sumitomo Mitsui Asset Management in Tokyo.

“Broadly speaking equities had enjoyed an almost uninterrupted run for the past few months, so we are seeing a bit of a correction finally emerging.”

All three major U.S. stock indexes dipped on Tuesday as an extended drop in crude oil prices hit energy shares and as General Electric plunged for a second straight day.

The euro stood little changed at $1.1793 after rising 1.1 per cent overnight to a 2-1/2-week high of $1.1805 as data showed Germany’s economy shifted into a higher gear in the third quarter.

Germany’s seasonally adjusted gross domestic product (GDP) rose by 0.8 per cent on the quarter, compared with a Reuters poll forecast of 0.6 percent.

Pressured by the euro’s surge, the dollar index against a basket of six major currencies lost about 0.7 per cent overnight before bouncing back modestly to 93.881..