U.S.’s efforts to boycott the sale of Iran’s oil won’t get them anywhere. We will export our oil as much as we need and we intend. They should know that their hostile measure won’t be left without a response. Iranian nation does not sit idle in the face of animosities. 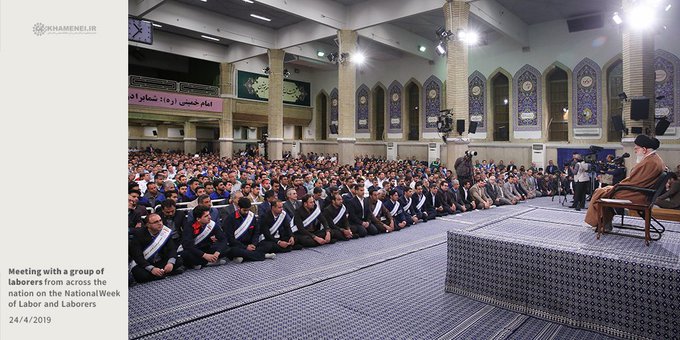 U.S.’s efforts to boycott the sale of Iran’s oil won’t get them anywhere. We will export our oil as much as we need and we intend. They should know that their hostile measure won’t be left without a response. Iranian nation does not sit idle in the face of animosities.

They wishfully think they have blocked Iran oil sales, but our vigorous nation and vigilant officials, if they work hard, will open many blockades. The less we rely on such form of oil sales, the more will be appreciative and this will be better for us.

Enemies have repeatedly, in vain, taken action against our great nation, revolution & IR who voice support for justice across world. In economic issues, they say they want to bring Iranian nation to its knees; but they must know Iranians won’t give in.http://english.khamenei.ir/news/6655/

99 people are talking about this

Iran’s state-run Press TV notes that Khamenei made those remarks while speaking to a large group of domestic workers on Wednesday. He reportedly downplayed the U.S. decision to end the exemptions from oil sanctions during his speech.

Acknowledging that the U.S. sanctions “have caused problems” in Iran, Khamenei called for “collective efforts to reduce domestic dependence on oil,” Press TV points out.

He went on to argue that Iran could benefit from the sanctions if they are dealt with “correctly and logically.”

“Sanctions lead to reliance on domestic power, capacity, and initiatives,” he said.

His comments came days after the White House announced the end to the waivers on Monday, urging Iranian oil consumers to stop purchases by May 1 or face sanctions.

When U.S. President Donald Trump withdrew from the Iranian nuclear deal last year, he restored restrictions on Tehran’s oil industry as part of a wave of sanctions.

Most of the waiver beneficiaries have already reduced their purchases of Iranian oil, including three – Greece, Italy, and Taiwan – that brought their imports down to zero.

Citing analysts from the Eurasia Group, CNBC notes that China and India, which heavily rely on Iranian oil, will “likely remain defiant” despite the threat of U.S. sanctions.

The analysts did predict that both countries will likely reduce their Iranian oil consumption, but not down to zero as demanded by the Trump administration.

In response to the restrictions on Iran’s oil industry, Iranian President Hassan Rouhani declared in December 2018 that Iran would ensure that “no oil” is exported from the Persian Gulf region, according to the regime-aligned Fars News Agency.

Rouhani explicitly threatened to blockade the Persian Gulf if the United States moved to suspend the waivers and tries to prevent Tehran from exporting its crude oil, stressing that Washington will not be able to do so.

It is unclear whether the Islamic Republic still maintains that position.

In November 2018, the Iranian president reportedly argued the waivers are a testament to America’s incapability to stop Iran’s crude oil sales.

On Wednesday, Ayatollah Khamenei repeated those assertions, indicating that the U.S. has “recurrently failed in their attempts to bring the Iranian nation to its knees,” Press TV reports.

“They (enemies) imagine they’ve blocked [our] way, but our vigorous nation and vigilant authorities will overcome the dead-ends if they put their efforts into this,” he reportedly added.

Iranian leaders have repeatedly said the United States will not be able to stop the Islamic Republic from selling oil.