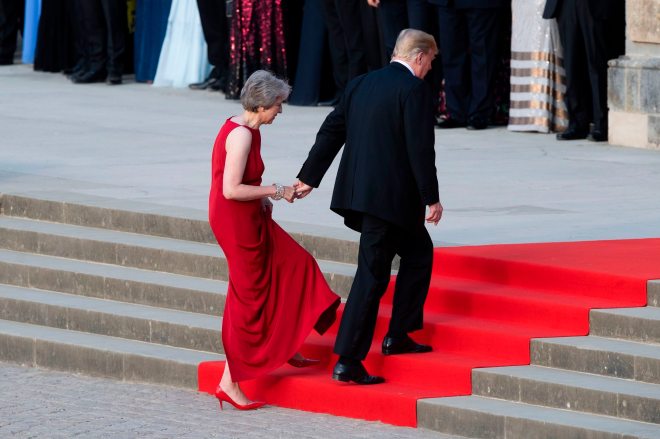 Queen Elizabeth II will host Donald Trump on a state visit to the UK on 3-5 June, risking a repeat of the nationwide public protests which greeted the US president during his trip last year.

A state visit is the highest honor afforded to visit dignitaries and comes at a critical time for Prime Minister Theresa May’s government as it tries to salvage the so-called special relationship and pursue a post-Brexit trade deal with the US. Trump, who will be a guest of the Queen, is likely to receive a banquet at Buckingham Palace and a ride in a gilt carriage escorted by mounted soldiers.

“The State Visit is an opportunity to strengthen our already close relationship in areas such as trade, investment, security and defense, and to discuss how we can build on these ties in the years ahead,” May said in a statement. “We must continue to stand together to uphold our shared values and way of life.”

Trump and May will hold talks in London and take part in an event to mark the 75th anniversary of D-Day, which saw massive allied landings in mainland Europe in one of the turning points of World War II. The two leaders will travel to Portsmouth for the commemoration, which will feature a fly-past and a gathering of Royal Navy warships.

Trump’s visit to the UK last July was quietly downgraded from a state visit, but that didn’t stop the protests. They included a helium-filled caricature of the president known as the Trump Baby. He didn’t visit Parliament and was forced to move around the country by helicopter.

The president was taken to Blenheim Palace, the 300-year-old mansion where World War II leader Winston Churchill was born. He met May at her country estate and took tea with the queen at Windsor Castle. All the venues were outside of London – part of the government’s strategy to avoid ruffling the feathers of a leader known to react impulsively to criticism – to steer clear of the tens of thousands of marchers who took to the streets.

Opponents of Trump have already announced that they will take to the streets again to protest against his visit.

Relations between Trump and May have been fraught. Despite being the first world leader to visit him at the White House, the two have never enjoyed a close rapport. He regards her as a bossy schoolmistress; she finds it hard to get a word in on their trans-Atlantic phone calls.

Trump’s past statements on Brexit have also made it harder for the prime minister to push her feuding Cabinet toward a compromise on leaving the European Union.

The president has repeatedly angered Britons, including by re-tweeting propaganda from a far-right British anti-Muslim group and criticizing London’s response to a terrorist attack