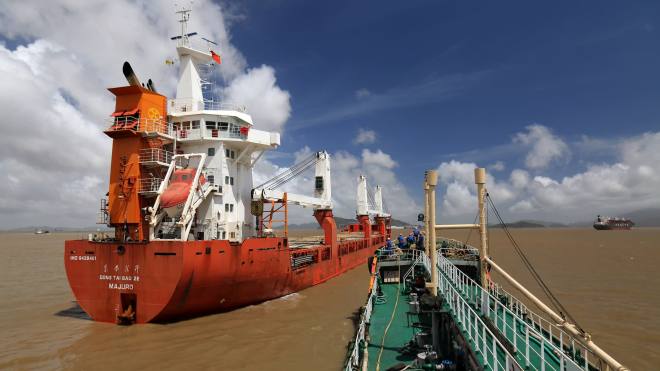 The end of waivers affects eight importers that had been granted a 180-day reprieve when the U.S. reimposed sanctions on Iranian crude oil in November. The importers include Japan, China, South Korea, Taiwan and India, along with Italy, Greece and Turkey.

The U.S. and its partners Saudi Arabia and the United Arab Emirates, meanwhile, “will take immediate action to ensure that supplies are made available to replace all Iranian oil removed from the market,” the White House said in a statement.

“We are going to zero across the board,” Secretary of State Mike Pompeo said at a news conference after the announcement. The oil waivers will cease on May 2.

Pompeo justified the decision by stressing the Trump administration’s goal to “incentivize Iran to behave like a normal country” and cut off funds used to destabilize the region.

“Up to 40% of the [Iranian] regime’s revenue comes from oil sales,” he said. “It’s the regime’s number one source of cash.”

China takes in about 400,000 barrels daily, while India imports 300,000 barrels a day, according to a market insider. Those two countries alone account for most Iranian oil exports.

Crude oil prices jumped immediately, with futures climbing as much as 3% to $65.87 a barrel on the New York Mercantile Exchange, hitting the highest level since Nov. 1, 2018. Perceptions of a global supply crunch are poised to broaden, especially given dwindling shipments from Venezuela and political instability in Nigeria and Libya.

But the White House believes the impact will be limited.

“We have been working with major oil producing countries to make sure the market has sufficient volume to minimize the impact on pricing,” Pompeo said, citing Saudi Arabia and UAE.

China imports only about 5% or so of its crude from Iran. The share in Japan shrank from 6% to just over 4% as of February. Japanese petroleum wholesalers have gradually ceased procuring Iranian crude since March, and there are no foreseeable disruptions to stable oil supplies.

“We have been closely trading opinions with the U.S. from the standpoint that the impact does not have to extend to Japanese corporate activity,” said Yoshihide Suga, Japan’s chief cabinet secretary.

But it remains to be seen whether all of Iran’s oil trading partners will fall in line with U.S. sanctions. An unnamed Iranian oil ministry source told the Tasnim news agency that the country will continue to export crude under its own discretion, with or without Washington’s permission.

“China opposes the unilateral sanctions and so-called long-arm jurisdictions imposed by the U.S.,” Foreign Ministry spokesperson Geng Shuang told reporters. “Our cooperation with Iran is open, transparent, lawful and legitimate — thus it should be respected.”

“What is important here is the solidarity and determination between us,” Cavusoglu said.