In La-Roche-sur-Yon – a town in western France founded by Napoleon Bonaparte – locals can only dream of raising enough money to restore their most treasured landmark. The church of Saint Louis built in 1817 to honour the emperor needs €7m (£6.1m) to save its bells, belfries, and to install a fire alarm but a six-month appeal has raised little more than €1,000.

Four hours’ drive away in Paris, the fund for Notre Dame is more than €1bn and rising.

Saint Louis is not an internationally renowned Unesco World Heritage church like Notre Dame, but its fate, like an estimated 5,500 churches in France needing urgent but expensive repairs, is symbolic of the national divide. It is a narrative that pits Paris against the provinces, wealthy tycoons who write charity cheques for €200m against ordinary French who struggle to make ends meet, the feted versus the forgotten. It is a division that sparked the gilets jaunes movement.

As the yellow vest protesters were due to take to the streets again on Saturday, French political analysts said it was make-or-break time for Emmanuel Macron to heal this national rift as he approaches the second anniversary of his election as president.

“We’ve had the gilets Jaunes, the Great Debate and now Notre Dame, if he cannot turn public opinion in his favour then he’ll finish his mandate unpopular,” said Bruno Cautrès of Cevipof, the political research centre at the Paris School of International Affairs (Sciences Po). “It’s a very important moment. There will not be a second chance.”

The sense of national unity engendered by the terrible sight of Notre Dame engulfed by flames last Monday evening has proven short-lived.

Macron’s pledge to rebuild the cathedral within five years to be “more beautiful than before” was widely dismissed as impossible. His suggestion the new spire might be “contemporary”, sparked a predictable row between traditionalists and modernists.

“Five years? Is Macron suddenly a structural engineer? This is not an extension to a suburban rail line we’re talking about here,” one newspaper critic tweeted.

The huge donations pledged by France’s wealthiest tycoons – admittedly all tax deductible – proved something of a poisoned chalice for Macron, frequently nicknamed “president of the rich”. Gilets Jaunes, union leaders and leftwing politicians saw it as symbolic of endemic inequality in France and accused the billionaires of being more concerned about historic buildings than human beings.

Donations pledged by France’s wealthiest tycoons proved a poisoned chalice for Macron, ‘president of the rich’

“It’s a good thing these wealthy people donated money but it does beg the question why they don’t do something to address social problems like poverty and homelessness,” Cautrès said. “We should first thank them, then hope they ask themselves this question.”

A leak of the measures Macron was due to announce before the Notre Dame fire, among them a freeze on hospital and school closures, the index-linking of pensions to inflation and the closing of the École Nationale d’Administration (ENA), the hothouse university that produces the country’s political and civil service elite, has not appeased angry protesters.

Cautrès said the president had failed to come up with a “grand measure” to calm public anger.

“Nobody gives a damn about the ENA. It’s good to question the diversity of the elite, but this is just a populist and demagogical measure,” he said. “When François Mitterrand was president he gave people the fifth week of paid holiday. That really changed their lives. Macron has come up with nothing to change the situation for ordinary people who have the impression that France is a fundamentally unequal and unjust society.

“This is not the revolution he promised when he came to power. His message was that he would be the president of all the French and he hasn’t got to that point. Is it too late for Emmanuel Macron? I think it’s a little bit late.” 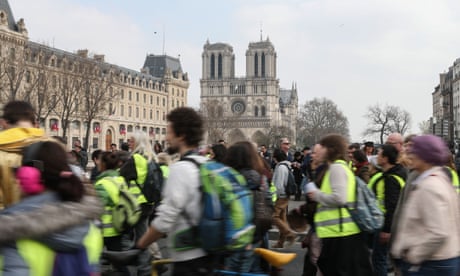 Gilets Jaunes banned from protesting near Notre Dame in Paris

Cautrès added: “The scale of demonstrations this weekend and on 1 May will be very important. If the gilets jaunes don’t give birth to a political movement or they don’t support an existing party, I can see the protests continuing until the end of Macron’s mandate.”

Jérôme Fourquet, of the opinion pollsters Ifop, said Macron’s popularity had jumped a few percentage points after the Notre Dame fire – to 29-32%, which is around the level before the gilets jaunes crisis last November – but predicted there would be “no shock rise or fall”.

“I’m not convinced Notre Dame will have much effect because it was not what the Americans call a ‘rally-around-the-flag’ moment, what happens when the country is attacked,” Fourquet said.

“He played his father of the nation role well after the fire, but if he tries to surf on the drama for too long it could turn against him. People are already saying Macron hasn’t come up with a response to the gilets Jaunes, which means they remain unhappy.”

Back in La-Roche-Sur Yon, the mayor, Luc Bouchard, is philosophical about his town’s fundraising efforts hitting a brick wall and does not begrudge Notre Dame a centime.

“Notre Dame is a building of world importance, an icon whose loss, like Palmyre [in Syria] and the great Buddhas [in Bamiyan, Afghanistan], is something extremely emotional. It’s another dimension completely,” he said.

“But I don’t despair. If there is more than enough money for rebuilding Notre Dame, I’d be very happy to take some of it to repair Saint Louis.”