Pep Guardiola must have been sick of the sight of Mauricio Pochettino.

This was the third time in the last 11 days that Manchester City and Tottenham have gone toe to toe, with the north London side coming out on top on the previous two occasions.
True, City may have won 4-3 in Wednesday’s pulsating Champions League clash but it wasn’t enough to stop Spurs advancing to the semifinals on away goals.
In the finale of the City-Spurs trilogy, Guardiola’s side went at least some way to exorcize the demons of Wednesday’s nightmare, which saw Raheem Sterling have a last-minute goal — a tie-winning goal — disallowed by VAR.
READ: Tottenham end Man City’s quadruple hopes after a mesmerizing clash
READ: Where does Man City vs. Spurs rank among Champions League classics?
Though that result is likely to haunt City for quite some time, they can at least take comfort in Saturday’s crucial, hard-fought 1-0 victory over Tottenham which saw them return to the top of the Premier League.
Much was made about City’s mentality in the build-up to this game and how the team would react to Wednesday’s soul-crushing result which seemed to drain the life out of the Etihad. 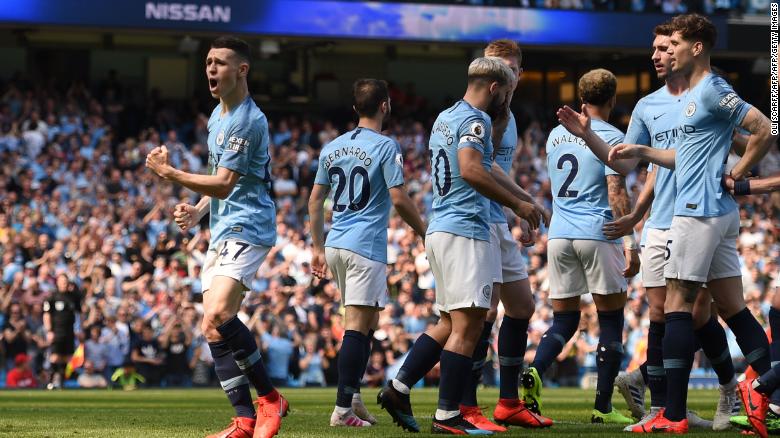 It’s the first Premier League goal Phil Foden has scored for City.
In his pre-match press conference, Guardiola pointed out that his superstars were still only human but implored them to use that disappointment to fire them to victory as they chase a consecutive Premier League crown in a nail-biting title race.
But the players — with the fans roaring them on from the first whistle — showed no signs of a Champions League hangover and took the lead inside five minutes.
Bernardo Silva’s deft ball into the box found Sergio Aguero, who showed impressive awareness and poise to cushion his header for Phil Foden to nod into an empty net.
It was the teenager’s first league goal for the club, becoming the first player born in the 2000s to score for City in the Premier League and it would prove to be the crucial winner.
On a sour note, Kevin De Bruyne — so impressive in City’s recent quadruple-chasing run of games — was the first casualty of the grueling set of fixtures as he limped off after half an hour with yet another injury.
Although Spurs mustered two good first-half chances — the first saved by Ederson and the second blocked wonderfully by Aymeric Laporte — they faded badly in the second and never troubled the hosts.
All in all, it was an impressive display of mental strength from City to navigate the first of two difficult Premier League clashes, the second coming in Wednesday’s derby against local rivals Manchester United.
With Liverpool leading by two points prior to kick off having played a game more, victory ensures City lead the title race again — for now at least.
Jurgen Klopp’s side faces relegation-threatened Cardiff City on Sunday and could once again return to the top of the Premier League with a win.