Novak Djokovic was lucky to avoid being defaulted after a monumental meltdown at the Monte Carlo Masters.

The two-time champion struggled with his serve at times but managed to reach the third round with a scrappy 6-3 4-6 6-4 win over Philipp Kohlschreiber.

Djokovic double-faulted eight times and needed five match points to beat Kohlschreiber, who lost eight of their previous 10 matches but secured a rare win in the third round at Indian Wells last month.

He caused problems again for the top-ranked Djokovic in an error-strewn match, which featured eight straight breaks of serve from when Kohlschreiber led 2-1 in the second set.

Midway through that, Djokovic needed treatment for a couple of minutes on his right thumb. He appeared to hurt it while sliding at the baseline during the fifth game.

“We both made a lot of unforced errors, it was not the prettiest match,” Djokovic said. “It was pretty rusty, but a win is a win.”

After Kohlschreiber dropped serve at the start of the deciding set – the eighth straight service break – Djokovic saved break points before holding for 2-0.

The 15-time Grand Slam champion, who will aim to win a fourth straight major when the French Open starts next month, then upped his level.

He held to love for 4-2 and saved a break point to go 5-3 up, forcing his 35-year-old German opponent to serve to stay in the match.

Kohlschreiber saved a first match point at 30-40 with a sublime drop shot and held.

Serving for the match, Djokovic fluffed another three match points. After finally sealing the victory when Kohlschreiber’s return landed long, he whacked the ball away in frustration and then whipped another one up into the crowd.

Djokovic, who lost in the fourth round of the Miami Open last month, seemed irritable at times and smashed his racquet into the ground at 4-2 down in the second set.

Later in the second, he lobbed his racquet at the ball when retrieving a shot at the baseline and inadvertently sent it into the crowd.

Had it hit a spectator, it would have probably resulted in a disqualification.

However he escaped a code violation altogether, which would have been his second – resulting in a point penalty – after he copped one for the racquet smash.

Many were left fuming that the World No.1 got off without any punishment for the second incident.

Djokovic, fortunate to avoid point penalty when throwing his racket into the crowd earlier, drops serve a 4th time and is 6-3 4-6 vs Kohlschreiber.

What a hideous choke job by spineless chair umpire who should have issued second code violation and point penalty to Djokovic after he threw his racquet into the crowd. That would have been 2nd set to Kohlschreiber.
Tsitsipas is so right.

“Djokovic was lucky to avoid a point penalty for flinging his racket into fans” ““When he does break it, he breaks it with venom and passion.”……. If @serenawilliams did this tho??? Would this have been the reaction? Idk about that…. #Tennis #doublestandard 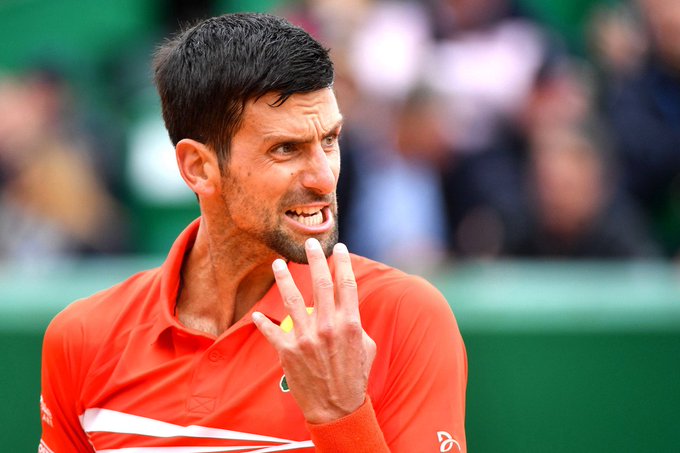 He next faces the winner of a second-round match between American Taylor Fritz and Argentina’s Diego Schwartzman.