Military rulers in Sudan have sacked a further slew of senior officials after pressure from protesters.

The move is the latest concession by the army-led transitional council, which took power last week following the fall of Omar al-Bashir after 30 years in power, and has since faced fierce pressure to rapidly give way to a civilian government.

Gen Abdel Fattah al-Burhan, the leader of the council, fired the country’s prosecutor general on Tuesday, less than 24 hours after protest groups demanded his removal. 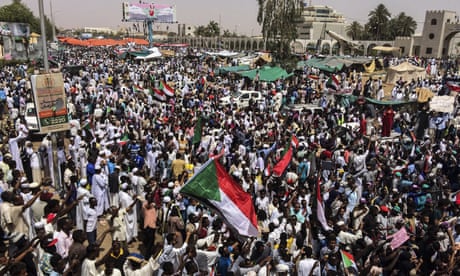 ‘No more old men in uniform’: on the ground with Sudan’s protesters

The protesters have already forced the first choice of the military as leader of the council to step down and caused the resignation of the head of the National Intelligence and Security Service (Niss).

The military rulers have said they want an “inclusive dialogue” with the protest movement and pledged to appoint a civilian prime minister.

Demonstrations against Bashir began in December amid an economic crisis and intensified 10 days ago when huge numbers massed outside the army headquarters in Khartoum, the capital, calling for army intervention to remove the president.

The military detained Bashir, 75, and announced a transitional period of up to two years followed by elections. However, demonstrators are pushing for a quick handover of power to civilians.

Some of the most prominent protest leaders, most of whom are in their 20s and 30s and were only released from detention in recent days, have called for the dissolution of Bashir’s National Congress party, the seizure of its assets and the arrest of the party’s leading officials.

They also want the dissolution of paramilitary groups loyal to the former government, major reforms of the security services and an end to repressive laws.

“For us, in the first stage, the transitional government stage, we will play a role in … establishing a democratic state,” said Gamaria Omar, a member of the Sudanese Professionals Association, a grouping of teachers, engineers, and doctors which led the protests.

“Afterwards, the SPA will be … a guardian of democracy in Sudan.”

Thousands of protesters remain camped outside the army headquarters in the capital, though numbers have declined since last week. The SPA has urged protesters to keep up the sit-in.

The resignation of Salah Abdallah Mohamed Saleh, better known as Salah Gosh, on Saturday as the head of Niss emboldened the protest movement. Gosh was once seen as the most powerful person in the country after Bashir and protesters held him responsible for the killing of demonstrators demanding an end to military rule.

Bashir was one of the longest-serving leaders in Africa and the Arab world. He took power in a coup in 1989 and had survived isolation from the west, civil wars, the secession of oil-rich South Sudan, and several previous bouts of protest.

Despite Bashir’s close ties to the military’s senior leadership, mid- and lower-ranking officers more connected to society sympathized with the protesters’ demands, said Hamid Eltigani, a Sudanese professor of public policy at the American University in Cairo.

As pressure from the streets mounted, factions within the security establishment distanced themselves from Bashir as they sought to protect their positions, he said.

One target of the protesters is Burhan’s controversial deputy, Mohamed Hamdan Dagalo, known by his nickname Hemet.

Dagalo heads Sudan’s Rapid Support Forces (RSF), a paramilitary grouping that grew out of the Janjaweed militias that fought in Darfur and provided troops to fight in Yemen. The RSF has been repeatedly blamed for extensive human rights abuses.

Other members of the 10-strong military council include a Niss representative and the chief of police.

Analysts believe the army may be waiting for splits in the protest movement to appear. The opposition in Sudan is fragmented and current unity may prove transitory, they say.

Officials say at least 65 people have died in protest-related violence since the unrest began.