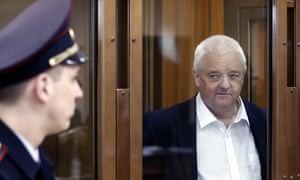 Frode Berg in a Moscow court on Tuesday before the announcement of the verdict Photograph: Maxim Shipenkov/EPA

A Russian court has jailed a Norwegian man for 14 years after finding him guilty of spying on nuclear submarines, a verdict that could strain ties between Moscow and its Nato-member neighbor.

Frode Berg, 63, a retired former guard on the Norwegian-Russian border, was detained in Moscow in December 2017 and tried behind closed doors this month. He pleaded not guilty to charges of espionage on behalf of Norway.

His lawyer, Ilya Novikov, said Berg would not appeal against the verdict and planned to request a pardon from the Russian president, Vladimir Putin.

Berg, who watched proceedings in handcuffs from a glass cage, has admitted to being used as a courier for Norway’s military intelligence but said he had no knowledge of the operation in which he took part.

Last week Putin appeared to leave the door open to the possibility that Berg could be pardoned or possibly exchanged as part of a prisoner swap.

Asked during talks with Norway’s prime minister, Erna Solberg, about the possibility of a pardon, Putin said: “We must wait for the court proceedings … We will take a look at what we can do with this depending on the court’s decision.”

State prosecutors had asked the court to jail Berg for 14 years. The maximum penalty for espionage is 20 years.

Novikov said before the hearing that he was expecting a guilty verdict and a lengthy sentence and that the defense was hoping diplomatic talks could lead to Berg’s release.

“The question is how successful diplomatic efforts will be to secure his release,” he said.