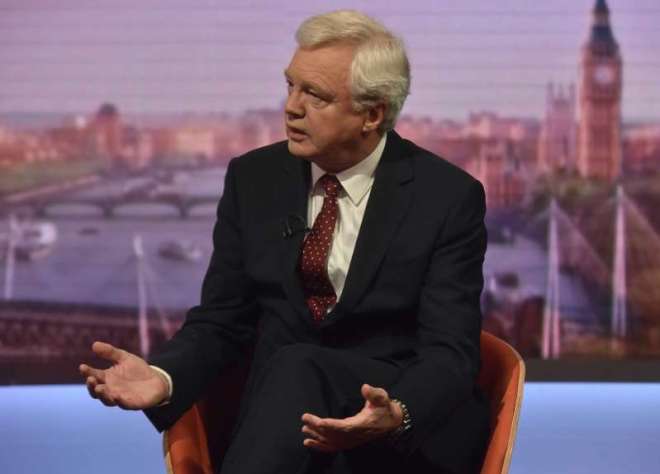 Mr Davis said he would vote against the Prime Minister’s Chequers plan in any Commons showdown as International Trade Secretary Liam Fox took a swipe at Chancellor Philip Hammond’s no real warnings.

Mr Davis also warned that Mrs May’s statement that she would not be “pushed into accepting compromises on the Chequers proposals that are not in our national interest” risked becoming an “an incredible open sesame to all”.

He told BBC One’s The Andrew Marr Show: “No, I’d vote against it, it would be rather odd for me to resign over something and then vote for it when it came back.

Mr Davis added: “We will be under the rule of the EU with respect to all of our manufactured goods and agri-foods, that’s a really serious concession, what about taking back control, it doesn’t work?

“That actually leaves us in a position where they dictate our future rules without us having a say at all, so it’s a worse deal.”

Asked if Theresa May could stay on as Prime Minister if she could not get the Chequers plan through the Commons, he said: “Oh yes.”

Mr Davis cited Tory MP Nick Boles’ concerns over Chequers, adding: “We’ve got to turn round with other alternatives.”

He also hinted at earlier tensions within the Government’s Brexit negotiating team, stating: “I was always the Brexit Secretary, the question is whether I controlled events, that’s another matter.”

On Chequers, he said: “I was quite clear in my mind that she (Mrs May) saw this as an opportunity to be grasped. My disappointment about Chequers is it actually denies us a large part of that opportunity.”

Mr Davis said he would “certainly not” support the People’s Vote adding: “The point about referenda is that they are once in a generation.”

Referring to the Treasury, Dr Fox told the BBC: “Can you think back in all your time in politics where the Treasury have made predictions that were correct 15 years out, I can’t, they didn’t predict the financial crisis that happened, no-one could.

“So this idea that we can predict what our borrowing would be 15 years in advance is just a bit hard to swallow.”

He added: “To say what a GDP figure would be 15 years ahead is not a predictive power that I’ve known the Treasury to have in my time in politics … I don’t believe it is possible to have a 15-year time horizon on predictions on GDP.”

“I’m happy to see people in the Conservative party who believe what we believe” says International Trade Secretary @LiamFox speaking on @Arron_banks#marrpic.twitter.com/y3rfNQeilI

He added: “I can’t imagine many things worse than remaining in the EU.

“There’s a lot of talk about the leadership of the Conservative Party, changing the leader doesn’t change the parliamentary arithmetic.”

Asked if Arron Banks was welcome to rejoin the Tory Party, Dr Fox said: “That’s up to individuals, are they willing to believe what we believe, if they do, they are welcome, the Conservative Party is a broad church.”

It was reported that the election strategist who helped Boris Johnson win the London mayoralty was involved in a bid to scupper the Cabinet’s Chequers compromise.

Sir Lynton Crosby, who also advised Mrs May in last year’s general election when the Tories lost their majority in a shock poll result, is maneuvering to derail the PM’s EU withdrawal agenda with a coordinated national campaign, according to the Sunday Times.