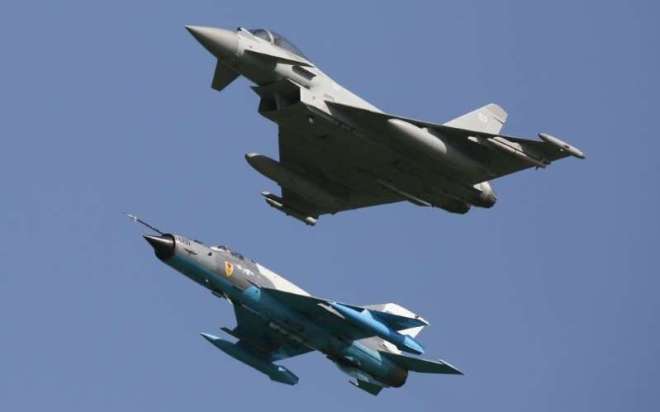 Jets from 135 Expeditionary Air Wing based in Romania have had to respond four times to threatened incursions since deploying to the region on a four-month tour of duty in May. The jets had to respond only once to similar threats on the 2017 deployment.

In the latest incident, RAF Typhoons from 1 (Fighter) Squadron launched in response to two suspected Russian SU-30 Flanker aircraft heading towards Nato airspace from the Crimea.

An RAF spokesman said the Russian aircraft were “repeating the recently seen activity in the air”. Romanian Defence Minister Mihai Fifor said such “provocations” by Russia had become “frequent” in recent months.

Four RAF Typhoons are deployed at the Mihail Kogalniceanu air base in southeast Romania as part of Operation Biloxi, Nato’s enhanced Air Policing mission to bolster the alliance’s eastern airspace. The jets deploy each year for four months to work alongside their Romanian counterparts.

The Defence Secretary, Gavin Williamson, visited Romania on August 2 to announce that London and Bucharest intended to forge a closer military working relationship. A bilateral memorandum of understanding is expected to be signed before the end of the year.

After one of the recent interceptions, one of the Typhoon pilots said: “We were monitoring the activity from the [operations] room as the Scramble was called”.

“Everything went as planned with both of us launching and heading east towards the two contacts. We had radar contact and shadowed the two aircraft as they flew through the Romanian Flight Information Region, but we never got within visual range to see them.”

Julian Lewis, Chair of the Commons Defence Select Committee, said he was concerned by the number of Russian sorties threatening Nato defences.

“Obviously in the present environment of East-West hostility it is clear that the Russians are testing us, both in the air and at sea at every available opportunity,” he said.

“All this highlights the fact that spending barely two per cent of GDP on defence is laughably inadequate to fulfil our strategic needs.”