NASA’s Parker Solar Probe has blasted off from Cape Canaveral Air Force station on its historic mission to the Sun.

The launch had initially been scheduled for early Saturday, but last-minute technical glitches ate away at the launch window, prompting a 24-hour delay. 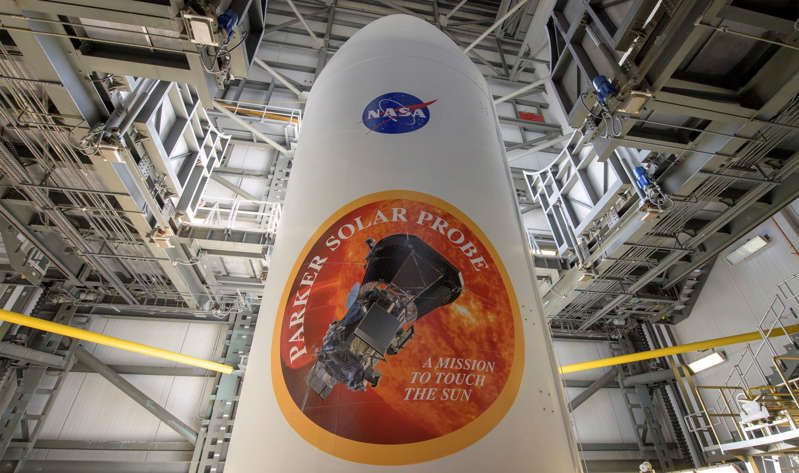 © Reuters The United Launch Alliance Delta IV Heavy rocket payload fairing is seen with the NASA and Parker Solar Probe emblems, at Launch Complex 37, Cape Canaveral Air Force Station, Florida, U.S., August 8, 2018. Parker Solar Probe will travel through the Sun’s atmosphere, closer to the surface than any spacecraft before it. Courtesy Bill Ingalls/NASA/Handout via REUTERS ATTENTION EDITORS – THIS IMAGE HAS BEEN SUPPLIED BY A THIRD PARTY. MANDATORY CREDIT.

The $1.5 billion mission will take humanity closer to the Sun than ever before. Parker will be the first spacecraft to fly through the Sun’s corona, the outermost part of the star’s atmosphere.

It is expected to reach the Sun in November.

Parker will face “brutal” heat and radiation during an epic journey that will take it to within 3.8 million miles of the Sun’s surface, according to the space agency.

This is seven times closer than the previous closest spacecraft, Helios 2, which came within 27 million miles of the Sun in 1976.

The average distance between the Sun and Earth is 93 million miles.

Parker must withstand the heat of nearly 2,500 degrees Fahrenheit to complete its audacious mission.

To achieve this, the probe will be protected by a special 4.5-inch-thick carbon-composite shield. Safe inside the spacecraft, however, the probe’s payload will be operating at room temperature.

Harnessing Venus’ gravity, Parker will complete seven flybys over seven years to gradually bring its orbit closer to the Sun.

On its closest approach in 2024, the probe will be traveling at approximately 430,000 mph, setting a new speed record for a manmade object.

The Sun’s corona, which can be seen during a total solar eclipse, is usually hidden by the bright light of the star’s surface. The probe, named after pioneering solar physicist Dr. Eugene Parker, will provide a wealth of invaluable data.

Scientists expect to shed new light on the Sun’s potential to disrupt satellites and spacecraft, as well as electronics and communications on Earth. 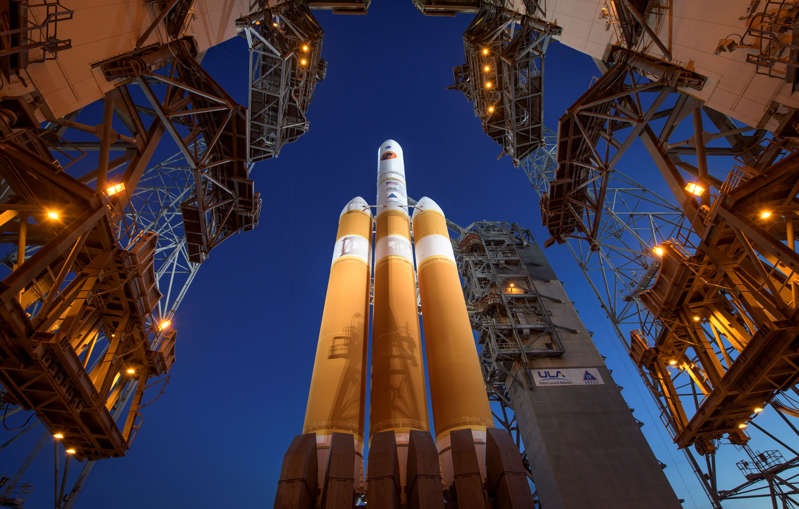 © Getty CAPE CANAVERAL, FL – AUGUST 11: In this handout provided by NASA, The Mobile Service Tower is rolled back to reveal the United Launch Alliance Delta IV Heavy rocket with the Parker Solar Probe onboard, Saturday, Aug. 11, 2018, Launch Complex 37 at Cape Canaveral Air Force Station in Florida. Parker Solar Probe is humanity’s first-ever mission into a part of the Sun’s atmosphere called the corona. Here it will directly explore solar processes that are key to understanding and forecasting space weather events that can impact life on Earth. (Photo by Bill Ingalls/NASA via Getty Images)

It is also hoped that the probe will provide answers to what scientists describe as “the coronal heating problem.”

One of the most unusual aspects of the Sun is that its atmosphere gets much hotter the farther it stretches from the star’s surface, according to NASA.

Instruments on board Parker will study magnetic fields, plasma, and energetic particles as well as imaging solar wind, a flow of ionized gases that stream past the Earth at more than a million miles an hour.

Eugene Parker first theorized the existence of the solar wind. To honor his contribution to science, the probe is NASA’s first spacecraft to be named after a living person.

WEIRD SOLAR SCIENCE: HOW NASA’S PARKER PROBE WILL DIVE THROUGH THE SUN’S ATMOSPHERE

The probe, which was designed and built by the Applied Physics Laboratory at Johns Hopkins University, is also carrying more than 1.1 million names to the Sun.

In March, members of the public were invited to be a part in the historic mission by submitting their names to be placed on a memory card that the spacecraft will take into space.

In May, NASA confirmed that over a seven-week period a total of 1,137,202 names were submitted.

Parker, which was designed and built by the Applied Physics Laboratory at Johns Hopkins University, is also carrying more than 1.1 million names to the Sun.

In March, members of the public were invited to be a part of the historic mission by submitting their names to be placed on a memory card that Parker has taken into space. In May, NASA confirmed that over a seven-week period a total of 1,137,202 names were submitted.