A British businessman branded a “serial killer” by Russian President Vladimir Putin was dramatically arrested in Spain this morning.

Bill Browder, who has previously said he fears for his life because of his criticism of the Russian government, was arrested on an Interpol warrant in Madrid.

He posted a defiant message on Twitter after he was released just over an hour later, accusing Russia of “abusing” Interpol. A Spanish police insider told Reuters that the warrant was no longer valid, but did not explain why. 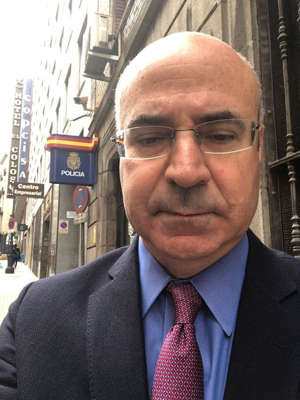 The 54-year-old has led a campaign calling for justice after his Russian lawyer, Sergei Magnitsky, died in prison after uncovering a huge fraud believed to involve Russian officials. He has also testified to the US Senate Judiciary Committee about alleged Russian interference in the 2016 US Presidential election.

After his release he wrote in a Twitter post: “Ironically, the reason I’m in Madrid is to give evidence to senior Spanish anti-Russian mafia prosecutor Jose Grinda about the huge amount of money from the Magnitsky case that flowed to Spain. Now that I’m released my mission carries on. Meeting with Prosector Grinda now.”

Just spoken to Bill Browder – very glad that he has now been released. Moscow should concentrate on bringing those responsible for the murder of #Magnitsky to justice

He wrote on Twitter: “Just spoken to Bill Browder – very glad that he has now been released. Moscow should concentrate on bringing those responsible for the murder of Magnitsky to justice.”

Earlier this year the hedge-fund manager, one of the Kremlin’s most high-profile public enemies, told MPs: “What the Russians would like to do more than anything is arrest me and get me back to Russia and then kill me in the control of their own system.”

And speaking after the poisoning of former double agent Sergei Skripal in Salisbury, he added: “I’m at risk, at high risk. I don’t spend my life living in fear, but I am definitely at risk.”

Moments later he tweeted a picture taken in the back of a police car and said he did not know what police station he was being taken to.

He has since posted a picture of his arrest warrant, revealing it is in connection with allegations of fraud.

Following his release, he posted a picture of himself outside a Spanish police station, writing: “Good news. Spanish National Police just released me after Interpol General Secretary in Lyon advised them not to honor the new Russian Interpol Red Notice.

“This is the 6th time that Russia has abused Interpol in my case.”

This is the arrest warrant pic.twitter.com/Cr1Sf4vS4a

He has been in conflict with the Russian state after his lawyer, Sergi Magnitsky, uncovered a £174million fraud involving Russian officials.

Mr Magnitsky died in prison in 2008, in what has been described as an ‘atrocious murder’.

The lawyer was allegedly tortured in prison after reportedly being convicted on false charges.

© AFP Mr Browder has led a campaign for justice for his Russian lawyer Sergei Magnitsky, who died in prison

In 2012 US President Barack Obama signed the Magnitsky Act, a law to punish Russian human rights violators, into law after lobbying by Mr Browder.

And two years later the European Parliament voted in favour of sanctions against 30 Russians alleged to be involved in the Magnitsky case.

Last year Russia’s investigative committee alleged that Mr Browder was behind the deaths of three men in connection with the fraud case.

In response, the businessman told The Guardian: “Putin is so rattled by the Magnitsky sanctions that he has completely lost touch with reality.”