North Korea suspended high-level talks with South Korea and threatened to call off a planned U.S.-North Korean summit in June, citing its objections to military exercises being conducted by the U.S. and South Korea.

The North’s official Korean Central News Agency, in a report published early Wednesday in Pyongyang, pointed to the drills involving the South Korean and U.S. air forces as a major concern, calling the maneuvers a rehearsal for invasion.

The air exercise is “a deliberate military provocation to the trend of the favorably developing situation on the Korean Peninsula,” North Korea said. “The U.S. will have to think twice about the fate of the DPRK-U.S. summit now on high agenda before a provocative military racket against the DPRK in league with the south Korean authorities.” 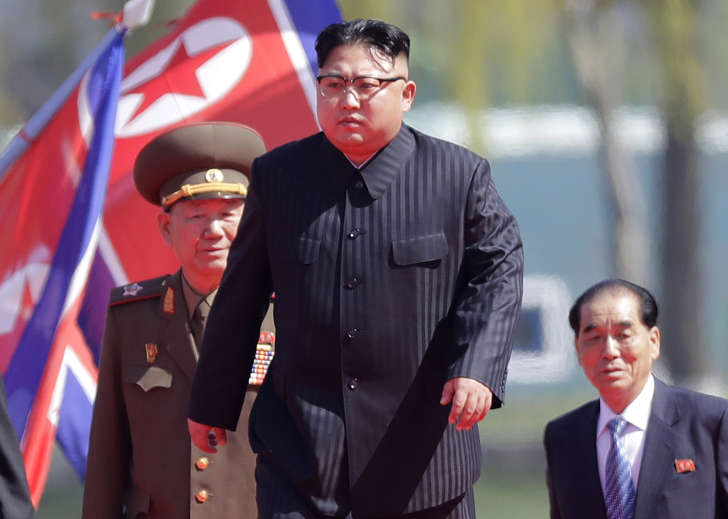 © AP FILE – In this April 13, 2017 file photo, North Korean leader Kim Jong Un, center, is accompanied by Pak Pong Ju, right, Hwang Pyong So, second left, as he arrives for the official opening of the Ryomyong residential area, in Py…

The DPRK is the acronym for the North’s formal name, the Democratic People’s Republic of Korea.

“We are operating under the idea and notion that the president’s meeting is going forward with Chairman Kim next month,” she said. She noted that Mr. Kim had previously told South Korea it understood the need for the exercises and that they had been planned well in advance. 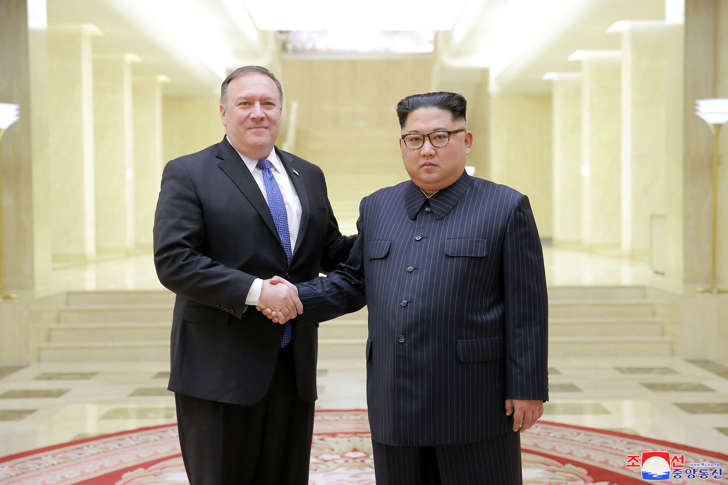 © AP U.S. Secretary of State Mike Pompeo, left, poses with North Korean leader Kim Jong Un for a photo during a meeting at the Workers’ Party of Korea headquarters in Pyongyang, North Korea.

White House press secretary Sarah Sanders said: “The United States will look at what North Korea has said independently, and continue to coordinate closely with our allies.”

A spokesman for South Korea’s presidential office referred requests for comment to the Ministry of Unification, which hasn’t yet issued a statement.

The exercise, named Max Thunder, began Monday and will run until May 25, and there were no imminent plans Tuesday to cancel it, U.S. defense officials said. Comprised of roughly 1,000 U.S. military personnel and 500 South Korean forces, the exercise is designed to test the interoperability of air assets between the two countries. It involves some of the most modern U.S. aircraft like the F-22 and in past years has included about 100 planes from the U.S. and South Korea. 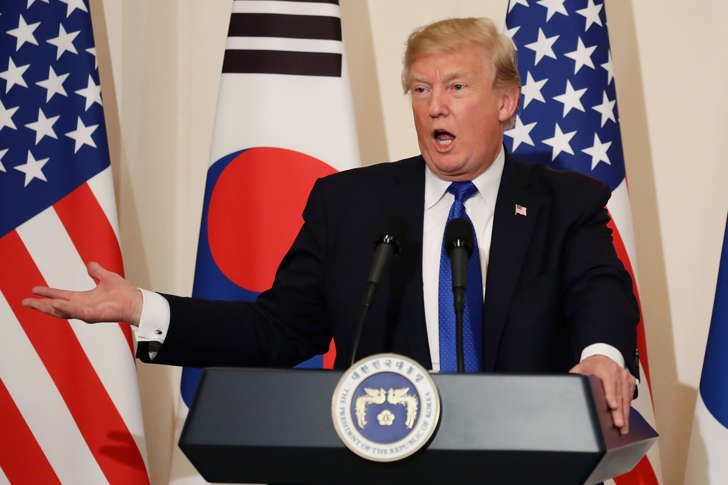 “These defensive exercises are part of the ROK-U.S. alliance’s routine, annual training program to maintain a foundation of military readiness,” a Pentagon spokesman, Army Col. Rob Manning, said, using an abbreviation for South Korea’s formal name, the Republic of Korea. “While we will not discuss specifics, the defensive nature of these combined exercises has been clear for many decades and has not changed.”

Max Thunder is among the smaller annual exercises between the two countries. It falls under the umbrella of a larger exercise called Foal Eagle, which involves as many as 300,000 South Korean troops and 30,000 U.S. troops. Major elements concluded earlier this month.

North Korea’s complaint comes weeks after a summit meeting between Mr. Kim and South Korean President Moon Jae-in at the inter-Korean demilitarized zone last month, a high point in a monthslong thaw in tensions that began at the beginning of the year, and which included the release last week of three U.S. citizens held by Pyongyang for more than a year. 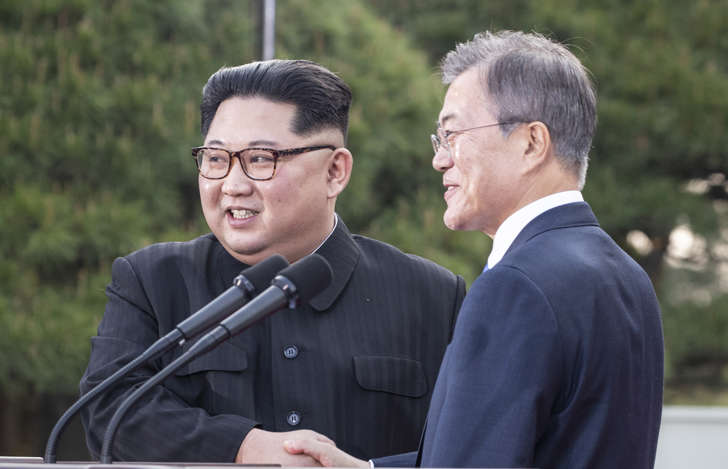 “Even before the ink of the historic April 27 Declaration got dry, the south Korean authorities and the U.S. started such a drill against the DPRK, reacting to all the peace-loving efforts and good intentions which the DPRK has shown with rude and wicked provocation,” it said.

The North on Wednesday didn’t cancel the planned June 12 summit between Messrs. Trump and Kim, which is set to take place in Singapore, but said that it would “closely watch the ensuing behavior of the U.S. and the south Korean authorities.”

The high-level talks between North Korea and South Korea that were suspended had been proposed by Pyongyang to take place just hours later on Wednesday on the southern side of the truce village of Panmunjom to discuss follow-up measures to the two Korean leaders’ summit last month. 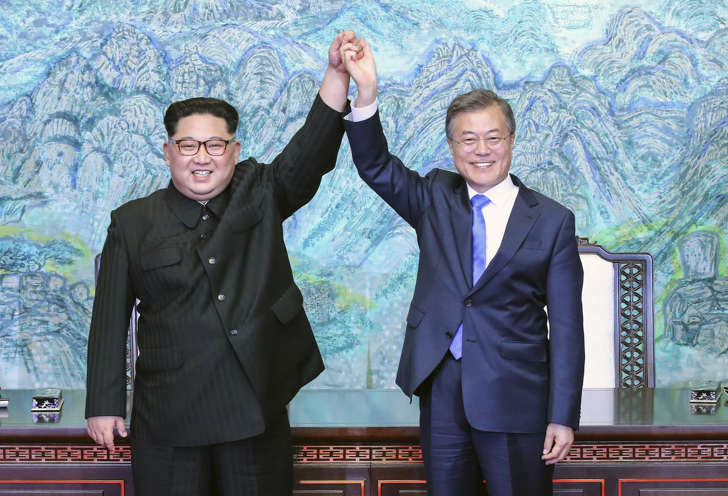 North Korea has abruptly scuttled plans in the past, most recently in late January, when it pulled the plug on a planned joint musical performance that the two Koreas had agreed to hold at a mountain resort in North Korea in the run-up to the Winter Olympics. The North cited South Korean press reports questioning Pyongyang’s motives for agreeing to hold the joint performance, the South’s Ministry of Unification said at the time.

After that hiccup, however, North Korea continued to push forward with rapprochement efforts with South Korea, sending Kim Jong Un’s younger sister to South Korea for the Olympic opening ceremony.

North Korea has also issued ominous warnings to the U.S. about human rights and Mr. Trump’s so-called maximum pressure campaign against it. Just a week ago, the North complained that U.S. assertions that Pyongyang’s willingness to engage in dialogue was the result of its maximum pressure campaign were “senseless remarks.” Instead, it said the detente was “created by the proactive efforts of the DPRK. 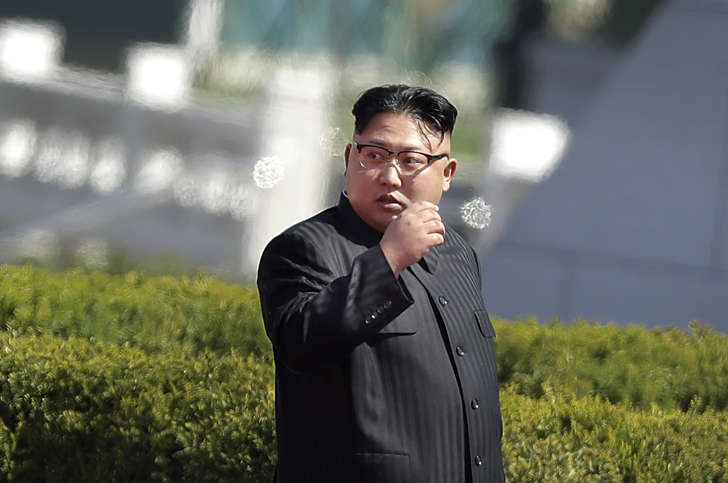 “The U.S. is persistently clinging to the hostile policy toward the DPRK, misleading the public opinion,” the North said last week through its state media. “Such behavior may result in endangering the security of its own country.”

In its report Wednesday, North Korea also lashed out indirectly at criticism of its rapprochement campaign by North Korean defectors, saying that it had allowed “human scum to brazenly hurl mud at the supreme dignity of the supreme leadership” of North Korea.

Write to Jonathan Cheng at jonathan.cheng@wsj.com, Michael R. Gordon at michael.gordon@wsj.com and Nancy A. Youssef at Nancy.Youssef@wsj.com