Theresa May has challenged Donald Trump on the impact of sanctions against Iran which will affect UK firms doing business there, amid a growing European backlash.

In a phone call dominated by Iran, the Prime Minister and President agreed to hold talks between the UK and US governments on the effect of sanctions on British companies.

The sanctions clash came as some European countries, including France and Germany, served notice that they are considering countermeasures to allow their firms to keep trading with Iran.

President Trump announced plans for sanctions when he confirmed on Tuesday that he was pulling the US out of the Iran nuclear deal – which he said was “rotten”, “horrible” and “one-sided”.

Within minutes of the President’s announcement, Mrs. May, French president Emmanuel Macron and German Chancellor Angela Merkel issued a joint statement expressing their “regret and concern”.

And after her phone call with the president, a Downing Street spokesman said Mrs. May had raised sanctions and re-stated her support for the Iran nuclear deal.

“The Prime Minister reiterated the government’s position on the Iran nuclear deal, noting that we and our European partners remain firmly committed to ensuring the deal is upheld, as the best way of preventing Iran from developing a nuclear weapon,” a spokesman said.

© Getty WASHINGTON, DC – MAY 08: U.S. President Donald Trump announces his decision to withdraw the United States from the 2015 Iran nuclear deal in the Diplomatic Room at the White House May 8, 2018 in Washington, DC. After two and a…

And the Number 10 spokesman added: “The Prime Minister raised the potential impact of US sanctions on those firms which are currently conducting business in Iran. They agreed for talks to take place between our teams.”

Downing Street said the Prime Minister and the President condemned the Iranian rocket attacks against Israeli forces earlier this week, and strongly supported Israel’s right to defend itself against Iranian aggression.

“They agreed on the need for calm on all sides and on the importance of tackling Iran’s destabilizing activity in the region,” the spokesman said.

During the phone call, Mrs. May also congratulated the US president on the safe return of three Americans who had been held in prison in North Korea.

“The two leaders looked forward to the summit which will take place between President Trump and Kim Jong Un in Singapore,” the spokesman said.

“The PM said the UK would continue to work with the US to keep up the pressure on North Korea to denuclearize.”

© Getty Merkel and Macron were in Aachen, Germany, on Thursday and called for a de-escalation in tensions in the Middle East

Mr Le Drian has already described the US sanctions as unacceptable, saying European business should not be required to pay for US foreign policy decisions. 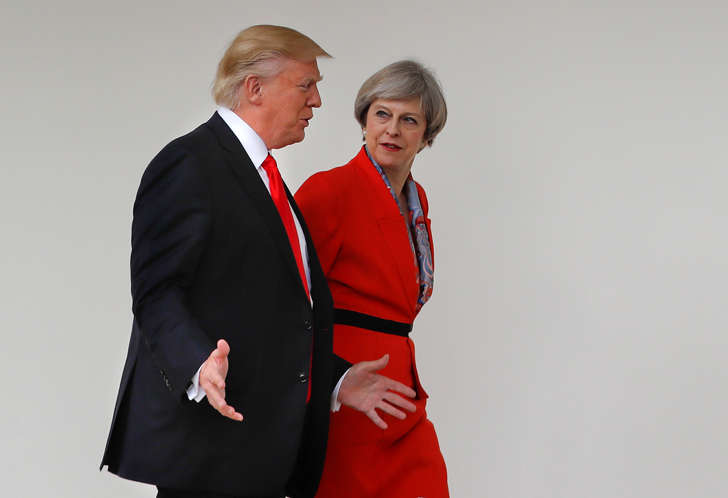 In her latest comments on Iran and sanctions, Chancellor Merkel said: “It is in our interest to have a strong transatlantic relationship.”

But she added: “If everybody does what they like, then this is bad news for the world.”

Iran has said it had asked Europe’s Airbus to announce whether it would go ahead with a plane deal with Tehran following the US pull-out.

US Treasury Secretary Steven Mnuchin has said that licenses for its US rival Boeing Co to sell passenger jets to Iran would be revoked.