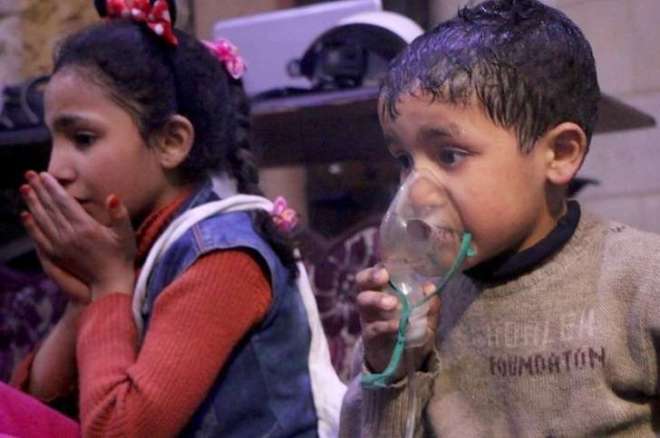 A seven-year-old girl who survived a suspected chemical attack in Syria has relived the harrowing moment a “barrel” hit her family’s home.

Masa and her family were hiding in a basement with dozens of neighbors in the besieged rebel-held city of Douma when warplanes struck.

The youngster, who still manages to smile despite being through hell, told how a “barrel” hit and started making a hissing sound as deadly gas was released.

© Provided by Trinity Mirror Shared Services Limited Masa was shown in harrowing TV footage at a medical point. After escaping to a clinic she was seen in harrowing TV news footage looking distressed as medics poured water on her and other young children were treated ot dead on the floor as they foamed at the mouth.

The US has said it believes sarin and chlorine were used in the April 7 attack which left at least 75 people dead.

The Syrian government has been accused of gassing its own people in an attack now being probed by chemical weapons experts.

The US, UK and France launched air strikes against Syrian chemical weapons sites on Saturday in retaliation for the Douma attack.

Masa was joined by her mum Amani as she recounted the terrifying ordeal and told the BBC how they survived while dozens of others suffered a horrific death.

The youngster and her family had sought shelter in a basement as Douma was shelled by warplanes.

She said: “Suddenly, they dropped a barrel. It did not explode but it made a ‘fesshhh’ [noise].”

© Provided by Trinity Mirror Shared Services Limited The seven-year-old is still able to smile days after the attack. In the ensuing chaos Masa and her family were told to flee for their lives.

She fell as they ran away from the suspected gas barrel bomb and, as her terrified mum screamed “my daughter”, her uncle scooped her off the floor and carried her upstairs in the block of flats.

Masa and her twin sister Malaz were taken to a medical point at the end of a tunnel, where medics put them on the ground and poured water on them to clean off any chemicals.

The girl told how she was given an injection during frantic scenes – as the bodies of child victims, including babies, lay nearby – and then survived another round of shelling when she returned home.

She looked on as bodies of the dead were carried away in the aftermath.

“We went back down to the basement and saw how they were bringing the martyrs.

“Instead of breathing the air, we breathed the smell of blood.”

Masa told the Sunday Times that the shirt she was wearing smelled of chlorine in the aftermath.

Her mum Amani, 34, said: “The bombs were really strong that night.

“They were so loud. There was dust everywhere.”

The Syrian government and its ally Russia have denied involvement in any such attack.

Inspectors from the chemical weapons watchdog OPCW have met with Syria’s deputy foreign minister, Faisal Mekdad, in the presence of Russian officers and a senior Syrian security official.

The inspectors were due to attempting to visit the Douma site.

French President Emmanuel Macron said on Sunday that he told his Russian counterpart Vladimir Putin, Syria’s most important ally, that Moscow was complicit in the use of chemical weapons in Syria.

Syria’s civil defense group, the White Helmets, has released a photo showing a gas canister on the roof of a building in Douma following the suspected chemical attack.