New Delhi: On a day the United States and its allies pounded Syria in retaliation for what they call a chemical attack by the Assad regime on civilians, India called for restraint, urging that dialogue was the way forward.

“We urge all parties to show restraint and to avoid any further escalation in the situation. The matter should be resolved through dialogue and negotiations, and on the basis of the principles of the UN Charter and in accordance with international law,” said Raveesh Kumar, the External Affairs Ministry Spokesperson.

In a joint operation by the US, the UK and France today, over 100 missiles were fired in what US President Donald Trump called “precision strikes” against Syria, where dozens of people were killed last week in a suspected toxic attack by Syrian government forces on the town of Douma. 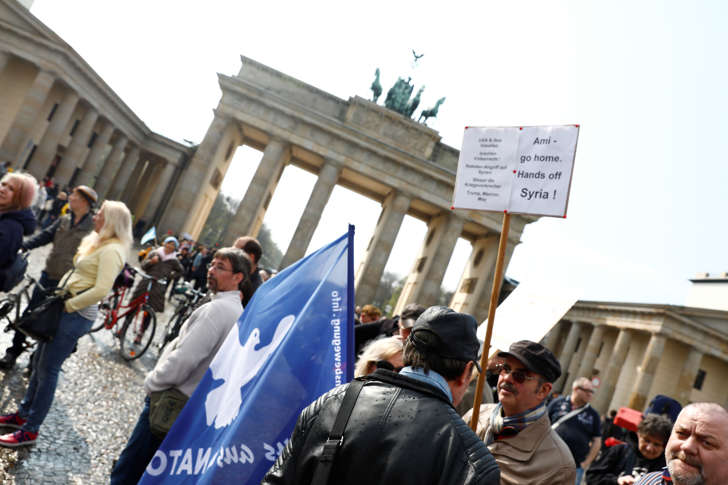 © Reuters A protester holds a poster during the demonstration against airstrikes on Syria in Berlin, Germany.

“The alleged use of chemical weapons, if true, is deplorable. We call for an impartial and objective investigation by the OPCW (Organisation For The Prohibition of Chemical Weapons) to establish the facts,” said Mr Kumar.

In a statement, OPCW, the chemical weapons watchdog of the United Nations, has said its fact-finding team will continue to investigate allegations of the use of chemical weapons in Douma where 70 people reportedly died due to an exposure to chemical attack.

Syria and Russia have condemned the air strike, denying President Bashar Assad’s forces did not use chemical weapons.

But the US that carried out its second strike on Syria in a year refuses to buy that argument.

President Trump, who said that the strikes were meant to be a “strong deterrent” against chemical warfare, now says “mission accomplished” and there “could not have had a better result”.