A Chinese space station the size of a school bus re-entered Earth’s atmosphere at about 5:16 p.m. Pacific time on Sunday, scattering its remaining pieces over the southern Pacific Ocean, according to the United States’ Joint Force Space Component Command.

The demise of the station, Tiangong-1, became apparent when radar stations no longer detected it passing overhead. There were no immediate reports of damage or injuries; the likelihood of pieces’ landing on someone was small, but not zero.

The station may have landed northwest of Tahiti, Jonathan McDowell, an astronomer at the Harvard-Smithsonian Center for Astrophysics, said on Twitter. That location is north of the Spacecraft Cemetery, an isolated region in the Pacific Ocean where space debris has frequently landed.

NW of Tahiti – it managed to miss the ‘spacecraft graveyard’ which is further south! pic.twitter.com/Sj4e42O7Dc

For the past few weeks, the fate of Tiangong-1 has provided some drama. The Chinese lost control of the spacecraft a couple of years ago and thus could not guide it to the middle of an ocean. Because of the drag of air molecules bouncing off Tiangong-1, the station’s altitude dropped, and the descent accelerated quickly in the last few days.

© Fraunhofer Institute, via Associated Press A radar image of Tiangong-1, the Chinese space station that re-entered Earth’s atmosphere. Multiple agencies issued predictions of the time of Tiangong-1’s end, most concluding that April 1 was the most likely date. But because it was moving so fast, it was impossible to know where exactly it would come down, and the debris would be scattered over thousands of square miles.

China launched Tiangong-1 — Tiangong translates as “heavenly palace” — in 2011 as essentially a proof-of-concept of technologies for future stations. Two crews of Chinese astronauts visited it, the first for 11 days, the second for 13 days. 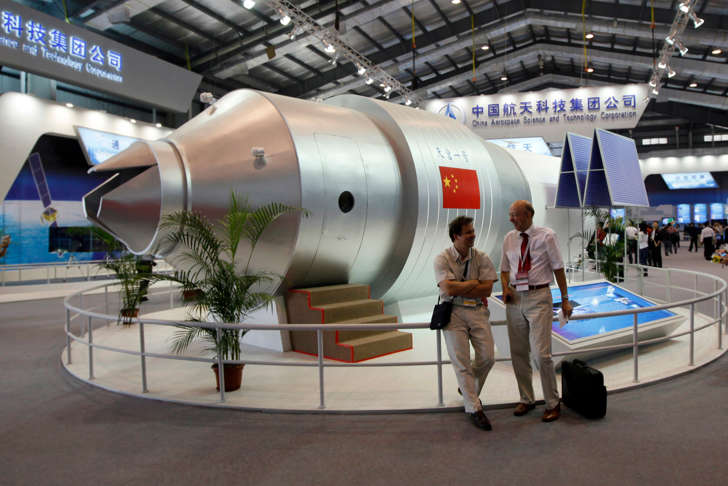 © AP FILE – In this Nov. 16, 2010, file photo, visitors sit beside a model of China’s Tiangong-1 space station at the 8th China International Aviation and Aerospace Exhibition in Zhuhai in southern China’s Guangdong Province. … In March 2016, the Chinese announced that communications had ended with the space station, but did not provide details. The altitude of the station was last increased three months earlier, in December 2015.

A second station, Tiangong-2, remains operating in orbit, and over the next few years, China plans to build a larger one

For objects as large as Tiangong-1, 0 percent to 40 percent of the mass will make it all the way to Earth’s surface without burning up. But the station is far from being the largest object launched by humans to re-enter the atmosphere.

The Russian Mir space station, with a mass equal to 15 Tiangong-1s, was the largest, but the Russians successfully guided it to a harmless end over the Pacific Ocean in 2001.

NASA’s Skylab space station, equal to nine Tiangong-1s, made an uncontrolled tumble back to Earth in 1979. Most of the debris landed in the ocean, but a few pieces did land in Western Australia. No one was hurt.