SEOUL, South Korea (AP) — North Korean dictator Kim Jong Un clapped his hands as he, along with his wife and hundreds of other citizens, watched a rare performance Sunday by South Korean pop stars visiting Pyongyang, highlighting the thawing ties between the rivals after years of heightened tensions over the North’s nuclear program.

A South Korean artistic group, including some of the South’s pop legends and popular girl band Red Velvet, flew to Pyongyang over the weekend for two performances in the North Korean capital, one on Sunday and the other on Tuesday. How North Koreans would react to Red Velvet was particularly the focus of keen media attention in South Korea.

During Sunday’s performance at the packed East Pyongyang Grand Theater, Kim made a surprise visit with his wife Ri Sol Ju, sister Kim Yo Jong and other senior North Korean officials including the nominal head of state Kim Yong Nam. Kim applauded during the event and shook hands with South Korean performers, even taking a group photo with them after their performance, according to South Korean media pool reports and footage from Pyongyang. 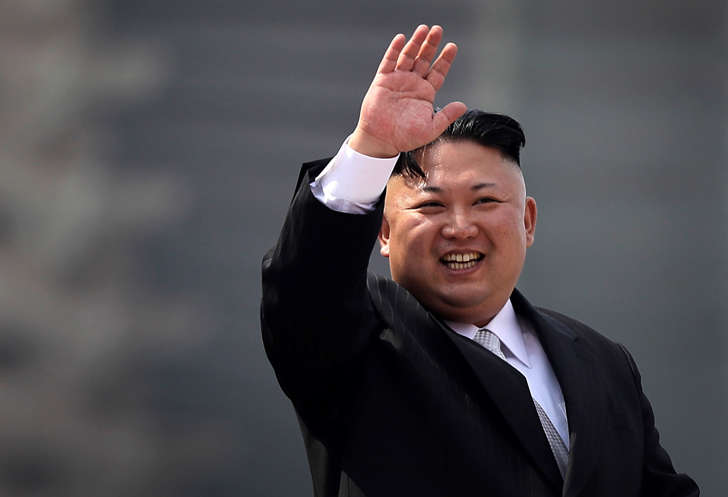 “There had been interests in whether I would come and see Red Velvet. I had initially planned to attend a performance the day after tomorrow but I came here today after adjusting my schedule,” Kim was quoted as saying. “I thank you for this kind of gift to Pyongyang citizens.”

The ongoing cooperation steps between the rivals began after North Korea took part in February’s Winter Olympics in Pyeongchang, South Korea. During the games, a North Korean art troupe performed in South Korea, and Moon and his wife watched it with visiting senior North Korean officials including Kim Yo Jong, who became the first member of the North’s ruling Kim family to visit the South since the end of the 1950-’53 Korean War.

Kim is to meet Moon at a border village on April 27 and President Donald Trump in May in separate summit talks.

On Tuesday, the two Koreas are to hold a joint performance.