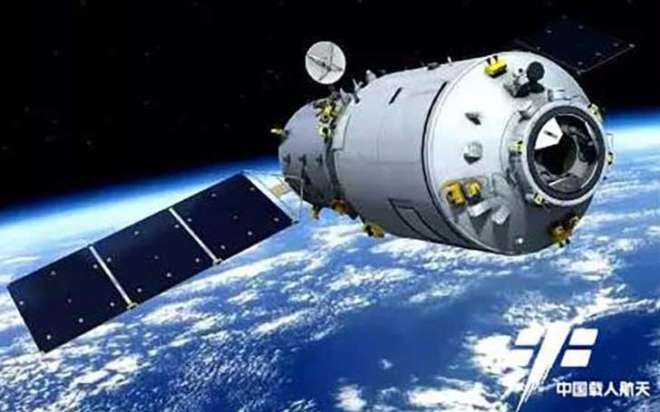 China’s out-of-control space station will plummet back to Earth in a fiery dive over the Easter weekend, with experts unable to predict for certain where it will land.

Tiangong-1 will re-enter Earth’s atmosphere somewhere between the 43rd north and south parallels, however, scientists say they will only be able to offer a more precise forecast one day before re-entry.

The European Space Agency (ESA) puts the probability a person being struck by space debris at one in 1.2 trillion – 10 million times less likely than getting hit by lightning.

“In the history of spaceflight, no casualties due to falling space debris have ever been confirmed,” said the ESA.

The station was considered to be a “potent political symbol” of Chinese ambition when launched in 2011 but ends its life an expensive piece of space junk whose ultimate fate has captured the world’s attention.

Tiangong-1, or the “Heavenly Palace”, was launched aboard a Long March 2F/G rocket from the vast Gobi Desert, Inner Mongolia, in 2011, as a beacon of China’s ambition to become a space power.

The 10.4-metre long spacecraft is China’s first prototype space station and served as an experimental testbed for future projects.

A precursor to China’s aim of launching a space station by 2020, Tiangong-1 had a planned operational timeline of two years before the length of its mission was extended.

In March 2016, Tiangong-1 stopped functioning after ground teams lost control of the craft, and since then it has been orbiting Earth and slowly dropping in altitude.

Defunct spacecraft are typically brought back down to Earth with a controlled reentry, burning up above the Pacific Ocean, with any debris left falling into an unpopulated ‘spacecraft cemetery’ away from inhabited areas.

With China powerless to command the defunct spacecraft’s engines to fire for a controlled reentry, it is impossible to forecast where the detritus will land.

China is playing catch-up in the space race, launching Tiangong-1 25 years after the Soviet Union launched the Salyut 1 – the original space station. It hopes to become a space superpower with plans to put a man on the moon, land a rover on the dark side of the moon and harbors ambitions to capture an asteroid.

The precise time and location of where the space junk might land cannot be accurately predicted, with the ESA currently estimating it will be sometime between 31 March to 4 April, however experts say this is “highly variable”.

Based on Tiangong-1’s orbital inclination, reentry will take place anywhere between 43º north and 43º south latitudes, which includes European nations Spain, France, Portugal, and Greece, as well as many other regions and continents, while there is “zero” chance any junk will hit the UK.

There is a slightly higher probability the debris from Tiangong-1 will land in areas including New Zealand, Tasmania, several northern US states and the Middle East.

The ESA said that at “no time will a precise time/location prediction be possible”. There are a number of factors as to why its reentry point cannot be accurately predicted including uncertainty over the spacecraft’s orientation, exact mass, and velocity.

Members of the public have been warned not to touch any debris that may fall to the ground due to the potential presence of a highly toxic and corrosive substance called hydrazine.

The doomed spacecraft will substantially burn up in the Earth’s atmosphere upon reentry, however, it is possible some parts will survive the intense heat and hit the ground.

“It will mostly burn up due to the extreme heat generated by its high-speed passage through the atmosphere,” said the ESA.

However, the probability of actually being hit by a piece of debris from the Tiangong-1 is 10 million times smaller than the yearly chance of being hit by lightning, according to the ESA.

“When considering the worst-case location the probability that a specific person will be struck by Tiangong-1 debris is about one million times smaller than the odds of winning the Powerball jackpot,” adds The Aerospace Corporation, an American non-profit space consultancy.

“Only one person has ever been recorded as being hit by a piece of space debris and, fortunately, she was not injured.”

Oklahoma resident Lottie Williams is believed to be the only person ever to have been hit by re-entering debris. She was struck on the shoulder by a returning piece of a Delta II rocket while walking through a park in 1997.

In 2017, a Kazakh man employed to clean up launch debris was killed in wildfires sparked by falling debris from a Russian rocket.

More than 500,000 pieces of space junk are being tracked as they orbit Earth, traveling at speeds of up to 17,500mph – fast enough to damage a satellite of spacecraft.

In 1979 the world was gripped awaiting the return of America’s first space station, Skylab, as it tumbled back to Earth following 2,249 days in orbit. It remains the largest uncontrolled reentry in spaceflight history with Nasa unable to accurately predict where the 85-tonne craft would land.

In the UK, British Airways prepared to delay its flights over fears it would hit Cornwall, prompting some holidaymakers to take cover in an old smuggler’s cave.

Several thousand protective hats were sold to Americans fearful of being hit by the space junk, while a local radio station in Atlanta gave away T-shirts labeled “official Skylab targets” with imprinted bullseyes, others held Skylab reentry garden parties.

Skylab’s reentry captured the media’s attention worldwide, with Filipino president Ferdinand Marcos appearing on national TV to urge calm, while a San Francisco newspaper offered a $10,000 (£7,000) prize to the first person to bring a piece of the spacecraft to its offices as part of a promotional campaign.

Partially disintegrated pieces of Skylab eventually landed in a sparsely populated area in Western Australia, a few hundred miles from Perth, despite efforts from Nasa to redirect it towards a remote spot southeast of Cape Town, South Africa.

A miscalculation by Nasa of just 4 percent on the air drag during tumbling meant Skylab debris landed hundreds of kilometers further east than experts had predicted, scaring a farmer’s sheep in the remote town of Rawlinna, but there were no casualties.

Skylab’s crash landing Down Under resulted in souvenir hunters descending on a 300-mile area with planes and jeeps, as well as the town of Esperance flippantly fining Nasa $400 for littering and a letter of apology from the US president Jimmy Carter.