An utterly broken Steven Smith has taken the weight of the Cape Town ball-tampering scandal on his shoulders, admitting full responsibility as captain of the Australian team for the conspiracy to use sandpaper in an attempt to gain reverse swing, and then the cover-up that followed.

Having arrived home in Sydney after his ban from playing for 12 months and from captaincy for two years under the Cricket Australia code of behaviour, Smith struggled to hide his grief at what had unfolded since he allowed the vice-captain David Warner and the young opening batsman Cameron Bancroft to put together a scheme to tamper with the ball. 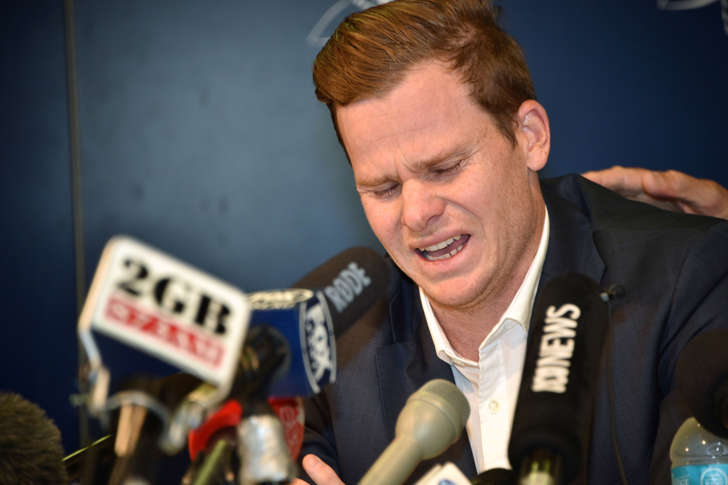 “To all of my teammates, to fans of cricket all over the world, and to all Australians who are disappointed and angry, I’m sorry,” Smith said in his statement at Sydney airport. “What happened in Cape Town has already been laid out by Cricket Australia. Tonight, I want to make clear that as captain of the Australian cricket team, I take full responsibility. I made a serious error of judgment, and I now understand the consequences. It was a failure of leadership, of my leadership. I’ll do everything I can to make up for my mistake, and the damage it’s caused.

“If any good can come of this, if there can be a lesson to others, then I hope I can be a force for change. I know I’ll regret this for the rest of my life. I’m absolutely gutted. I hope in time, I can earn back respect and forgiveness. I’ve been so privileged and honored to represent my country and captain the Australian cricket team. Cricket is the greatest game in the world. It’s been my life and I hope it can be again. I’m sorry and I’m absolutely devastated.”

In addition to his ICC and CA sanctions, Smith has been banned from this year’s IPL and has lost numerous endorsement deals. But it was the thought of his parents that clearly caused him the most pain, as he said when asked of what he would say to the children who had idolized him as the world’s leading batsman and the national captain.

“Firstly that I’m deeply sorry. I love the game of cricket. I love entertaining young kids, I love kids wanting to play the great game of cricket that I love,” he said. “Anytime you think about making a questionable decision, think about who you’re affecting. You’re affecting your parents, and to see how my old man’s been … and my mum, it hurts. I just want to say I’m sorry for the pain I’ve, I guess, brought to Australia and the fans and the public. It’s devastating and I’m truly sorry.”

Smith did not deflect any blame for the episode onto Warner or Bancroft, saying that things had occurred under his watch as the leader. “I don’t blame anyone,” he said. “I’m the captain of the Australian team, it’s on my watch and I take responsibility for the actions of what happened last Saturday in Cape Town. For me, I think my week has been around ‘good people make mistakes’, and I’ve made a big mistake by allowing this to happen. It was a huge error of judgment on my behalf and I’m deeply sorry.”

As to whether the Australian team had engaged in ball tampering previously, Smith maintained that this was the first, only and, arguably, last time it would ever be attempted. “To my knowledge, this has never happened before,” he said. “This is the first time I’ve seen this happen, and I can assure you it will never be happening again.”