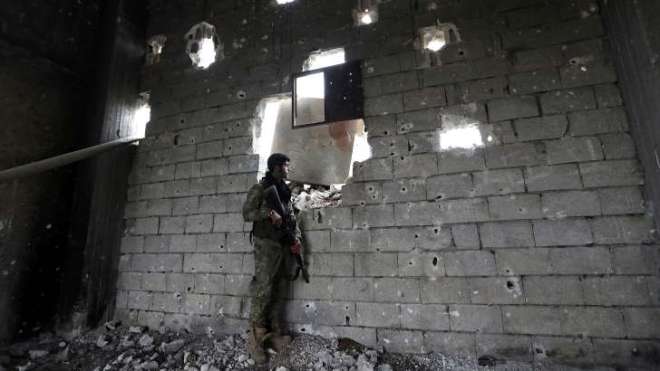 Turkey’s intervention in the area of Afrin in northern Syria has exposed an essential truth that the Pentagon has long tried to conceal: The Kurdish-led Syrian Democratic Forces the United States relies on to fight the so-called Islamic State in eastern Syria is allied with the infamous regime of Bashar al-Assad.

This became obvious because in another theater of this multifaceted, multifront war, in what is referred to as the north Syrian Afrin pocket, the SDF was daily losing territory to Turkey—and asked the Assad regime for support.

(The SDF has many faces, among them the Kurdish People’s Protection Forces, or YPG, and its civilian party, the PYD or Democratic Union Party —about which more later.)

Assad sent in “public forces,” an untrained militia. But Turkey used its artillery to scatter the several hundred fighters, thought to be a mix of Shiites living in the region and foreign fighters brought into Syria by Iran.

The Turkish operation, which relies on a ground force of relatively moderate Arab rebels, hasn’t brought the quick victory that President Recep Tayyip Erdoğan had predicted shortly after he launched “Operation Olive Branch” on Jan. 20.

Advances have been slowed by rains, mud, and mountainous terrain. Turkey has captured one, two, sometimes up to five villages a day as its forces surround the city of Afrin. On Monday, the Syrian rebel forces completed the encirclement. But ousting the Kurdish guerrillas may take time, for the core defenders are hardened combatants, prepared to fight to the death.

The defending SDF units haven’t had it easy. They have failed to recapture any of the villages and as the noose around Afrin tightens, they appear to be in a desperate plight. Last week their Kurdish brethren in Aleppo gave up military control over two districts of Syria’s biggest city, turned them over to the Assad regime, and headed to Afrin.

Turkish artillery decimated one convoy of SDF forces from Aleppo, but many of the estimated several hundred Aleppo Kurds have gotten through. They are now said to be fighting on the front lines. But it hasn’t been enough, and Kurdish officials are pleading for help.

“We haven’t received support” from the Syrian government, Saynam Muhammed, an official of the political arm of the SDF in Afrin told The Daily Beast. “We call upon the Syrian government to preserve its sovereignty and protect its borders, which are being penetrated by Turkey.”

The official SDF spokesmen in Afrin did not respond to requests for comment.

The U.S. has criticized the Turkish operation chiefly because SDF Kurds have left the front lines in eastern Syria to join their brethren in northern Syria. But the U.S. complaint has fallen on deaf ears in Ankara, the Turkish capital.

For Turkey, which has been fighting an armed Kurdish insurgency for more than 30 years, the offensive in Afrin has won support across party lines as a move to assure Turkey’s future territorial integrity.

Repeatedly in the past four years, Kurds in eastern Syria and Afrin have announced their goal to unite predominantly Kurdish territories that are scattered through northern Syria into one contiguous strip along the Turkish border. Turkey says this would produce an inexorable pressure on Turkish Kurds to secede and form a Kurdish state.

Judging from the latest statements of Kurdish politicians, the SDF has abandoned its political goal, at least for the present.

The other reason U.S. pleas to Turkey have fallen on deaf ears is that the American-led intervention against ISIS in eastern Syria is built on claims about its Kurdish allies that belie political reality.

Both the Obama and Trump administrations have claimed, contrary to ample evidence, that the Kurdish leadership of the SDF is independent of the Kurdistan Worker’s Party or PKK, which is on the U.S., EU, and Turkish list of terror groups. The PKK’s goal has been to dismember Turkey.

At the Pentagon last Thursday, a spokesman was unable to answer a reporter’s question about whether the U.S. had become an ally of the Assad regime by virtue of the SDF’s collaboration with the regime. A later written response didn’t provide much clarity. The armed Kurdish groups in Afrin “are not defeat-ISIS coalition partners,” it said. The U.S. partnership with the SDF “is limited in scope to operations to defeat ISIS.”

As that suggests, to maintain the fiction that there are separate SDF groups, the U.S. government has had to duck reality. The Syrian Kurdish faction now in control of the Kurdish cities in northern Syria—and in Afrin—is in fact the PKK’s affiliate in Syria. It’s gone through name changes at the behest of the U.S. military, from the People’s Protection Force or YPG into the Syrian Democratic Forces or SDF, but the different factions, all of which call themselves SDF, still answer to a leadership beholden to the PKK, which is based in Qandil, Iraq.

There’s been no better evidence of this than the reaction of SDF forces elsewhere in Syria to Turkey’s intervention into Afrin. A significant number of Kurdish troops fighting ISIS with U.S. forces in eastern Syria—U.S. officials won’t say just how many—crossed Syrian regime lines and traveled overland to join their Kurdish brethren in Afrin. The Kurdish forces’ departure in Aleppo last week was another example of a coordinated, if inadequate, attempt to go to the rescue of the Kurd-controlled Afrin.

Also overlooked by the U.S. is how the PKK’s Syrian affiliate took control of northern Syria in the first place. It wasn’t through elections, nor by a groundswell of public opinion. Control was handed to them by the Assad regime in late 2012 along with artillery, weapons, armored vehicles, border posts, and offices. But the regime kept control of the airport in Qamishli, the main city in northern-eastern Syria, as well as a major outpost of Syrian Air Force Intelligence, the most powerful security force in Syria.

The YPG’s political arm, the Democratic Union Party or PYD, is one of many Kurdish parties, and arguably one of the least popular. At least a half million people under PYD control have fled to the territory of the Kurdistan Regional Government (KRG) in northern Iraq, according to KRG officials, and hundreds of thousands more went to Turkey and western Europe, Kurdish emigres say. A top State Department official during the Obama administration called the region under PYD control “a mini totalitarian state.”

According to Assad regime security defectors, the Assad regime turned to the PYD because only the PYD was willing to ally itself with the regime in suppressing Kurds who wanted to take part in the national uprising. But the Assad regime has a record of making big concessions to an irregular force within its borders—it allowed ISIS to control Raqqa as a state within a state for four years with impunity—only to abandon it when outside forces are attacking.

In turning to the PKK’s Syrian wing as an ally against ISIS, the U.S. wittingly or unwittingly allied itself with the Assad regime and went on to carry out a military operation that the regime ultimately favored.

So exactly what has motivated Turkey to mount its operation into Afrin?

There’s no question that Turkey, for reasons of its own national security, wants to see the PKK and all its affiliates destroyed or severely weakened. The Afrin SDF’s response only gave new reason for Turkish anger shortly after Turkey began its military operation. Over two weeks, the Afrin SDF fired 83 rockets and mortars into southern Turkish towns and cities, killing seven civilians, one of them a Syrian refugee.

Erdoğan has also said repeatedly the overthrow of the Afrin SDF will allow Syrian refugees to return to their country. Turkey now has 3.5 million Syrians within its borders. Turkish Prime Minister Binali Yıldırım said Sunday that 350,000 refugees could return to their homes after the operation ended.

That figure seems high. But there’s no question that the Afrin YPG is responsible for driving hundreds of thousands from their homes. In an offensive two years ago carried out with heavy Russian air support, the Afrin Kurds moved out of the pocket and headed east towards Azaz, a major crossing to Turkey which funneled humanitarian aid to the millions of displaced Syrians and military supplies to the anti-regime forces.

On the way, the YPG conquered the city of Tal Rifaat, which was full of Syrians displaced from other cities, and as many as 100,000 fled that town alone.

According to Col. Abdul Muni’em al Na’asan, commander of the Northern Division of the “National Army,” the Turkish-backed Arab force now fighting in Afrin, 250,000 civilians fled Tal Rifaat and nearby villages and towns and most are now living in primitive tent cities in the area.

Turkey also has other long term aims. One is to block the Assad regime, a sworn enemy, from regaining a foothold on Turkey’s border from which it could threaten southern Turkish cities again. Capturing Afrin will also facilitate the movement of Turkish and rebel forces into the neighboring Syrian province of Idlib, where at least 2.5 million internally displaced Syrians are now living.

Turkey says it has no intention of staying in Afrin or any other part of Syria it’s now occupying, but intends to turn over governance to the local inhabitants. At the same time, if Turkey can take Afrin, regain Tal Rifaat, bring security to parts of Idlib and perhaps, moving beyond, to these areas to the city of Manbij now under SDF control, Ankara will have an important bargaining chip when it comes to an eventual Syria peace conference.