The Trump administration will officially move the U.S. embassy in Israel to Jerusalem by May, the State Department said, as the U.S. speeds up the timetable for a decision that has infuriated Palestinian leaders and jeopardized the American role as mediator in the Middle East peace process.

Under the new arrangement, signed by Secretary of State Rex Tillerson on Feb. 22 and announced Friday, Ambassador David Friedman and a small group of staff will take up work in an existing U.S. consulate in Jerusalem’s Arnona neighborhood in May, to coincide with the 70th anniversary of Israel’s founding. Expansion of the facility will take place by the end of 2019, the State Department said.

President Donald Trump announced in December that he was recognizing Jerusalem as Israel’s capital and would move the embassy there from Tel Aviv, an action that past U.S. presidents have also promised but never delivered on because of its politically charged symbolism.

“Every other president really lied, because they campaigned on it,” Trump said Friday at a conservative conference outside of Washington. “That was always a big part of the campaign. Then they got into office, they never did it.”

Last month Vice President Mike Pence had told the Israeli parliament that the embassy move would take place in 2019.

Recognizing Jerusalem as Israel’s capital is controversial because the eastern part of the city — home to some of the holiest ancient sites in Judaism, Christianity and Islam — is also claimed by Palestinians as the capital of a future state. Critics argue that Trump was essentially circumventing Israel-Palestinian peace talks, where Jerusalem’s status was to be one of the topics for negotiation.

Congress passed a law in 1995 recognizing Jerusalem as Israel’s capital and requiring the president to move the American embassy to the city, but previous U.S. leaders have invoked waivers permitted under the law to avoid starting that process.

Trump’s decision provoked protests from across the Middle East and beyond. Palestinian leaders said Trump’s declaration disqualified the U.S. as a mediator in the long-running peace process, while the United Nations General Assembly voted 128-9 to condemn the plan. 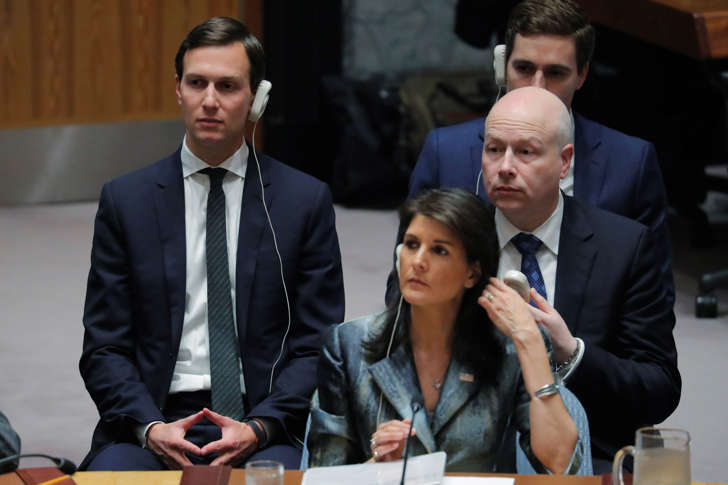 The decision also spurred a fierce internecine battle within the administration between the State Department on the one hand and Trump, Pence and Trump’s son-in-law Jared Kushner on the other. Pence and Kushner, who Trump has put in charge of the Middle East peace process, have demanded the embassy be moved quickly, while Tillerson has argued for more time to ensure the safety of U.S. citizens. Officials said any move to build a new embassy in Jerusalem would take several years.

The move was further clouded in confusion in January, when Steve Goldstein, the undersecretary of state for public diplomacy and public affairs, said plans to build a new embassy in Jerusalem had been abandoned because such construction would be “cost-prohibitive.” He said the existing facility would be retrofitted instead, a comment that administration officials said provoked anger from Pence and Kushner.

Goldstein appeared to have been overruled in the time since. In the announcement on Friday, the State Department said the U.S. has started searching for a site for a permanent embassy, “the planning and construction of which will be a longer-term undertaking.”

In a wrinkle, Trump’s administration is also in early discussions with Sheldon Adelson, the billionaire owner of Las Vegas Sands Corp., the world’s largest casino operator, and a major Trump backer, to help fund the embassy, according to a State Department official who asked not to be identified discussing private matters.

State Department lawyers are studying the legality of the proposal, which Adelson has been discussing with Friedman since last year, the official said. The early consensus is that U.S. law wouldn’t allow for the embassy to be privately funded but the talks are continuing, according to the official who commented after Adelson’s offer was reported Friday by the Associated Press.

To contact the reporter on this story: Nick Wadhams in Washington at nwadhams@bloomberg.net.

To contact the editors responsible for this story: Bill Faries at wfaries@bloomberg.net, Larry Liebert