NASA’s Mars 2020 rover is going to carry a chunk of an ancient Martian meteorite back to its home planet. Ancient pieces of Mars have been resting on Earth in the form of meteorites, which scientists determined blew off Mars’ surface millions of years ago. Now, scientists have decided to send a chunk known as Sayh al Uhaymir 008 (SAU008) aboard the rover, NASA announced Tuesday.

The soon-to-be meteorite passenger is going to be used as target practice for a laser technology designed to examine rock features on Mars as fine as human hair. The laser instrument known as SHERLOC (short for Scanning Habitable Environments with Raman and Luminescence for Organics and Chemicals) will study Martian rock—but scientists need a testing spot first. Oftentimes, instruments like SHERLOC are tested on rocks, metal and glass placed on the Red Planet, and even spacesuit materials—which helps SHERLOC analyze how spacesuits survive the Martian environment. But, scientists at the California Institute of Technology’s Jet Propulsion Laboratory scientists thought using a piece of Mars itself might prove even more effective for target practice.

“We’re studying things on such a fine scale that slight misalignments, caused by changes in temperature or even the rover settling into the sand, can require us to correct our aim,” Luther Beegle principal investigator for SHERLOC from the Jet Propulsion Laboratory, said in a statement. “By studying how the instrument sees a fixed target, we can understand how it will see a piece of the Martian surface.”

SHERLOC works by using similar techniques that forensic experts use. For instance, certain chemicals exposed to ultraviolet light reveal a certain glow—like that beneath a black light. SHERLOC will use a similar process through taking pictures of Martian rock and mapping the chemicals that “glow” to indicate the presence of life.

“This kind of science requires texture and organic chemicals—two things that our target meteorite will provide,” Rohit Bhartia of the Jet Propulsion Laboratory and SHERLOC’s deputy principal investigator, said in a statement. 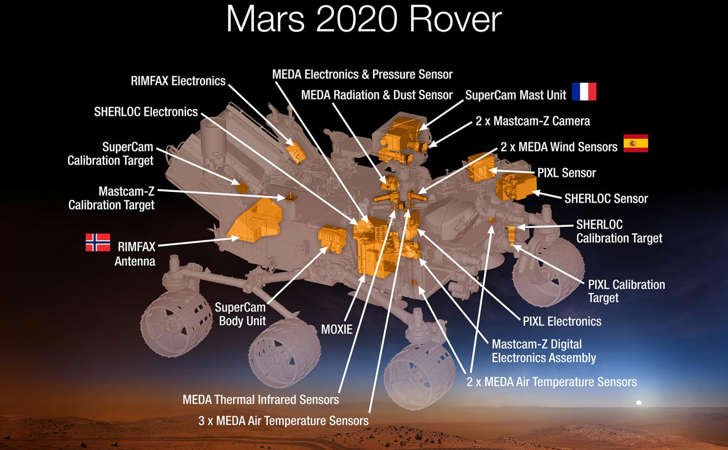 © NASA Science instruments for NASA’s Mars 2020 rover mission. The hunt for the perfect meteorite to send back to Mars was carefully planned. There are around 200 known Martian meteorites on Earth—and scientists had to find one that could survive launch and landing. Plus, it needed to be tough, not flaky, and have specific chemical features to test SHERLOC. The one they chose, SaU008, was discovered in Oman in 1999. The sample is rugged, according to researchers, and it was also conveniently up for grabs to use as a test sample from Caroline Smith, the principal curator of meteorites at London’s Natural History Museum.

There will be two pieces of SaU008 for testing on Earth and on Mars. The sample to go to Mars will be the first to return to the planet’s surface, though not the first on a return trip to Mars in general. Zagami, another Martian meteorite is still floating in Mars’ orbit on the now-defunct Mars Global Surveyor. A second instrument called SuperCam on Mars 2020 rover will also pick out a sample for target practice. Smith said in a statement: “This is a first for us: sending one of our samples back from home for the benefit of science.”