South Korea’s president ate kimchi and drank soju liquor with the North’s ceremonial head of state and the sister of its leader Kim Jong-un on Saturday, even as the US warned against falling for Pyongyang’s Olympic charm offensive.

South Korean President Moon Jae-in hosted the elderly Kim Yong-nam – technically the highest-level Northern official ever to go to the South – and Pyongyang’s star representative Kim Yo-jong at the presidential Blue House for the landmark meeting.

Smiling, he shook hands with each of the delegates ahead of their formal talks, and television footage showed that Kim Yo-jong – who analysts expected to bring a personal message from her brother – was carrying a blue folder emblazoned with a seal.

There is speculation Pyongyang could invite Mr Moon to visit for a summit later this year.

The nuclear-armed North’s delegation is the diplomatic highlight of an Olympics-driven rapprochement on the divided peninsula.

Tensions between the two soared last year as Pyongyang tested missiles capable of reaching the US mainland and its most powerful nuclear device to date, while Kim Jong -un and US President Donald Trump traded personal insults and threats of war.

The North is subject to multiple rounds of UN Security Council sanctions over its banned weapons programmes. Analysts believe its diplomacy is seeking to weaken the measures against it, and could be trying to loosen the alliance between Seoul and Washington.

Mr Moon shook hands with both Kim Yo-jong and Kim Yong-nam at the Olympics opening ceremony on Friday, and they cheered as athletes from North and South entered the arena together behind a unification flag showing an unbroken Korean peninsula.

US Vice President Mike Pence, who was seated in the same box, did not interact with the North Koreans at any point, US officials said.

He also did not shake hands with Kim Yong-nam while making a brief appearance at a leaders’ reception ahead of the ceremony – although Japanese Prime Minister Shinzo Abe, whose country is also regularly threatened by Pyongyang – did so, while exchanging pleasantries with the North Korean. 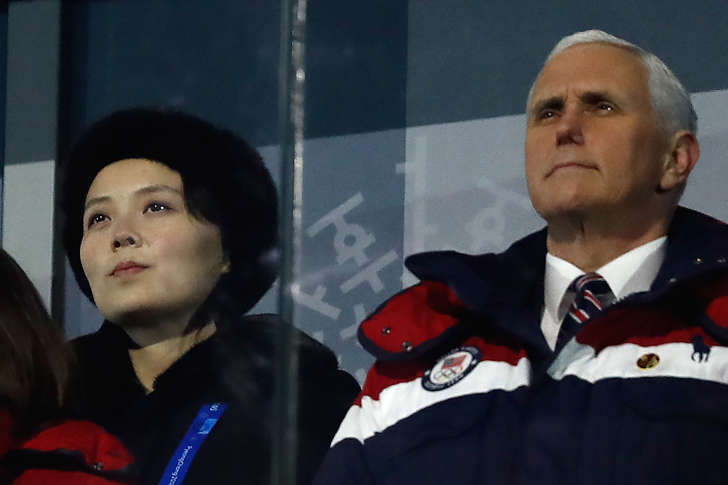 Kim Yo-jong and Mike pence “The U.S will not allow the propaganda charade by the North Korean regime to go unchallenged on the world stage. The world can NOT turn a blind eye to the oppression & threats of the Kim regime.,” Mr Pence tweeted on Saturday.

He also reiterated the Trump administration’s stance that the US would take whatever “action is necessary to defend our homeland”, including military operations, as it seeks to denuclearise the North.

“We’re going to continue to put all the pressure to bear economically and diplomatically while preserving all of our military options to see that that happens,” Pence told NBC.

Pence has repeatedly said he would deliver a tough message to the North in any meeting.

In stark contrast, two kinds of kimchi – the fermented cabbage that features in every Korean meal – were on the menu for lunch, a Blue House official told AFP, one mild Northern style version and a spicier Southern recipe.

The officials would also drink soju, the Korean rice alcohol, together.

The North’s presence in the South has dominated Olympic headlines, with the winter sports festival triggering a flurry of cross-border trips culminating in the diplomatic delegation.

All eyes have been on Kim Yo-yong, who has rapidly risen up the ladder since her brother inherited power from their father.

Who’s at the Olympics opening ceremony She is now among his closest confidantes and is the first member of the dynasty to set foot in the South since the end of the Korean War in 1953.

She has been demonstrating a very different demeanor than she does in the North, said Korean Peninsula Future Forum analyst Duyeon Kim.

The Rodong Sinmun, the official mouthpiece of the North’s ruling party, carried seven pictures of the group’s departure from Pyongyang and arrival in Incheon on its front page on Saturday.

On page two it printed seven more of the opening ceremony and its representatives’ meetings and handshakes with Mr Moon, whom it described as president.

It is rare for the North’s official media to refer to the South’s leader as president, usually describing them as chief executive or similar, and even more unusual for a picture of them to be shown.

The paper lambasted Mr Pence for his “anti-DPRK lunatic spasm which does not fit the spirit of the Olympics”.

“We don’t do such treacherous and dirty things exploiting sports festivals for political purposes like the US does,” it insisted.