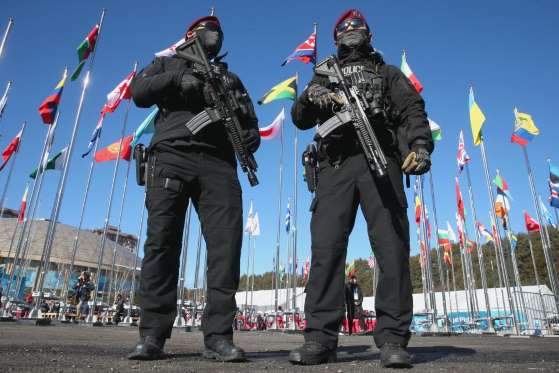 North Korea has accused the U.S. of politicizing the upcoming Winter Olympic Games in an attempt to disrupt fragile peace talks between the two Koreas.

Citing a Newsweek article published last month, the official Korean Central News Agency (KCNA) criticized the U.S.’s decision to send Vice President Mike Pence to the quadrennial games set to begin next week in the South Korean city of Pyeongchang. A White House official told Reuters last month that Pence intended to not only root for Team USA, but to prevent North Korean supreme leader Kim Jong Un from taking the opportunity to “hijack the messaging around the Olympics,” which the state-run outlet called “a great event of the homogenous nation” being sabotaged by Washington.

“This is aimed to check the trend for improved inter-Korean ties that has gained momentum thanks to the DPRK’s bold and proactive efforts, and to drive a wedge among the Koreans,” the agency wrote, referring to North Korea by an acronym for its full title—the Democratic People’s Republic of Korea.

“On the eve of the Olympics the U.S. is unhesitatingly committing acts of insulting the sincerity made by the DPRK and ruining the Olympics by rendering the political and military threats toward the DPRK to the extremes, and dispatching strategic assets including nuclear carrier and special units,” the commentary added.

Riot Police patrol during the Pyeongchang 2018 Olympic Village opening ceremony at the Olympic Village Plaza on February 1, 2018, in South Korea. The two Koreas may be searching for peace, but Vice President Mike Pence’s trip could raise tensions. Alexander Hassenstein/Getty Images

The latest peace initiative began after Kim reached out to South Korea during a New Year’s speech in which he also vowed to continue producing nuclear weapons and ballistic missiles now capable of hitting targets across the globe. President Donald Trump credited his “maximum pressure” strategy with bringing Kim to the table via intense economic sanctions and military drills, but North Korea has maintained that it was an independent gesture intended to reunite the two neighbors who have technically been at war for more than six decades.

While the two Koreas have agreed to reopen cross-border hotlines and participate jointly in some Olympic events, no major breakthroughs have been made. The U.S. has viewed the dialogue with suspicion, refusing to endorse it unless Kim made the overture of putting his nuclear arsenal up for debate. North Korea has taken pride in its nuclear weapons program as being the only thing it saw stopping a potential U.S. invasion.

Friday’s article, entitled “KCNA Commentary Hits U.S. Scheme to Turn Olympiad into Confrontation Theater,” dismissed the official reason for Pence’s Olympics visit, which the White House official told Reuters last month would ensure that the games are not “turned into two weeks of propaganda.” The government-controlled outlet referenced the Hong Kong-based South China Morning Post and Russian Senator Konstantin Kosachev, both of whom were recently critical of the U.S.’s approach to North Korea.

“It is quite natural that the international community is concerned about what the U.S. vice-president is going to do targeting the DPRK at the Winter Olympics,” KCNA wrote.

“The U.S. should not run amuck,” it added. “It will invite international isolation as it fails to face up to the trend of the times.”

Increased numbers of personnel and vehicles are seen practicing information at the Miriam Parade Training Facility in this satellite imagery provided by Airbus Defense & Space via 38 North, January 28, 2018. On the day before the Olympic Games, North Korea has planned what appeared to be a massive parade to commemorate the 70th anniversary of its military. Airbus Defense & Space/38 North

The Trump administration has repeatedly expressed a willingness to attack North Korea in order to neutralize Kim’s nuclear weapons arsenal. In the past week alone, U.S. ambassador to South Korea hopeful Victor Cha suggested he was dropped when he objected to a “bloody nose” strike against North Korea and the White House has reportedly pressured the Pentagon to produce viable military options.

Meanwhile, Kim had his own Olympic pre-game plans. On February 8, the day before the games are set to begin, North Korea has scheduled a massive military parade to commemorate the 70th anniversary of its military. Large congregations of soldiers, vehicles, and equipment have been detailed in the latest update of parade preparations by expert intelligence analyst Joseph Bermudez on North Korea monitoring project 38 North.