Theresa May has sparked a new clash with Brussels by saying that EU citizens who arrive during the post-Brexit transition period must not have the same rights as those who came before.

The prime minister’s remarks set her on course for a major skirmish with officials in Brussels, who have offered a “status quo” transition period until December 2020, including free movement and citizens’ rights for those who settle in the UK during that period.

Rules for new EU migrants could include mandatory work permits, requirements to register on arrival and restrictions on access to benefits, which would not apply to EU citizens who moved to the UK before Brexit.

Speaking to reporters on a three-day trip to China, May said the details were “a matter for negotiation for the implementation period, but I’m clear there is a difference between those who came prior to us leaving and those who will come when they know the UK is leaving.”

May said she wanted to resist the idea that not much would change after the UK exits the block, putting her at odds with her chancellor Philip Hammond who said the aim was for “very modest changes” post-Brexit.

“What we’re doing now is doing the job that the British people asked the government to do which is to deliver on Brexit,” she said. “In doing that they did not vote for nothing to change when we come out of the EU.”

Brussels intends to firmly rebuff any attempt to water down the ”four freedoms”, including the free movement of people, during the transition period, sources said.

The EU believe they had agreed with the UK that citizens coming to the country before the end of the transition period would be covered on rights for EU nationals. 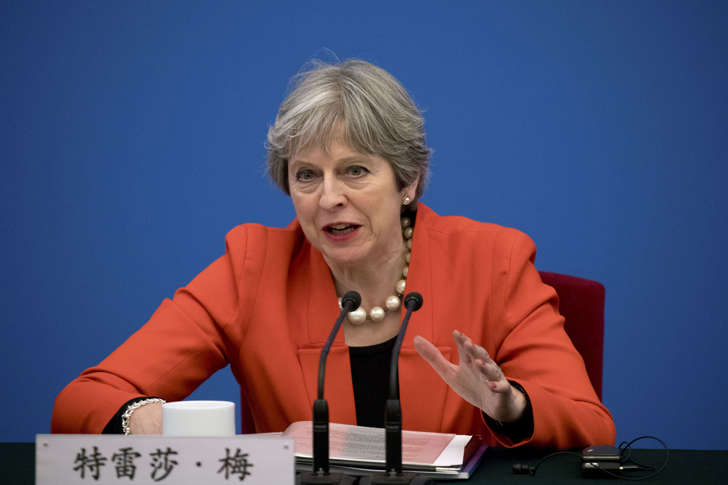 © Reuters Guy Verhofstadt, the European parliament’s Brexit coordinator, told The Guardian: “Citizens’ rights during the transition is not negotiable. We will not accept that there are two sets of rights for EU citizens. For the transition to work, it must mean a continuation of the existing acquis with no exceptions.”

May’s comments also triggered anger among campaigners and MPs who raised fears about discrimination and uncertainty in light of the PM’s remarks.

Nicolas Hatton, the co-founder of the3million which represents European citizens living in Britain, argued that the UK was effectively staying inside the EU until the end of the transition period because it wanted to retain the benefits of membership until then.

“I think there would be utter chaos if there is a distinction between those arriving by March 2019 and those arriving in transition because there is no way to make a distinction between those groups, so it could lead to widespread discrimination of EU citizens,” he said, raising fears about access to jobs, ability to secure accommodation and having a functioning bank account.

Meanwhile, the Labour MP and leading supporter of the Open Britain campaign, Peter Kyle, said EU citizens made an “enormous contribution” to Britain, including to public services and the NHS. He argued they “should be welcomed and valued rather than turned away”.

“For thousands of British businesses that depend on being able to recruit staff from across the EU, the prime minister’s latest comments will only increase the uncertainty created by Brexit,” added Kyle.

The EU27’s position is that, during a transition, the UK must accept the rules of the single market, customs union, including free movement and decisions of the European court of justice, including new EU laws that come into force. Britain would no longer have ministers, diplomats or MEPs.

May again insisted that she did not want to extend the transition period beyond two years. “On the length of the implementation period, people were saying, ‘oh we’re secretly negotiating for three years.’ No. We’re not,” she said.

“We’re very clear. I said in the Florence speech that we expected it to be around two years because that is what seems to be the right period of time, practically. But I’m also very clear we are not talking about something that is going to on and on. We’re leaving the European Union.”

Her comments on citizens’ rights leave the UK with several key sticking points for the second phase of negotiations with Brussels. Several key Brexiters in the cabinet are said to have strong reservations about the offer on the table from Brussels, including the foreign secretary Boris Johnson.

Brexit secretary David Davis told a committee of peers on Monday that the UK would robustly oppose the EU’s decision to apply all its laws and regulations to the UK until the end of 2020. “There will be an argument, I’m sure, about the issue of whether we can object to new laws that we haven’t had a say in,” he said.

Last week, Jacob Rees-Mogg, the leave-backing Tory MP who chairs the European Research Group, accused the government of threatening to turn the UK into a “vassal state” during the transitional period.