Donald Trump has said he would have negotiated Brexit with a “different” and “tougher” attitude to Theresa May.

The US president said the European Union was “not cracked up to what it’s supposed to be” and claimed he was unsurprised by the result of the Brexit referendum because Britons “don’t want people coming from all over the world into Britain”.

The comments could be seized on by Brexiteers to urge the Prime Minister to be harder in Brexit talks, but Remains could attack Leavers for sharing views with the controversial and divisive president.

They could also be seen as a blow for Mrs. May following her largely successful meeting with Mr. Trump in Davos, Switzerland, on Thursday.

In an interview to be broadcast on ITV on Sunday night, Piers Morgan asked Mr. Trump if Mrs. May was in a “good position” in Brexit talks.

The president replied: “Would it be the way I negotiate? No, I wouldn’t negotiate it the way it’s (being) negotiated… I would have had a different attitude.”

In extracts released to the Mail on Sunday, he went on: “I would have said that the European Union is not cracked up to what it’s supposed to be.

“I would have taken a tougher stand in getting out.” 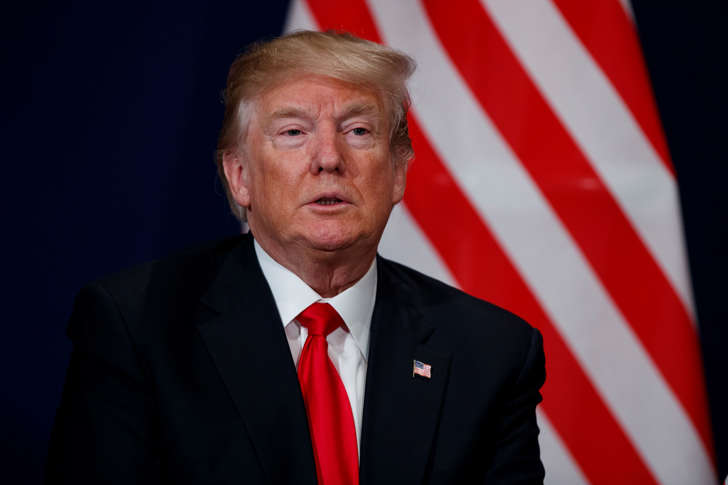 © AP Donald Trump The president said: “I said (that) because of trade, but mostly immigration, Brexit is going to be a big upset. And I was right.”

He added: “I know the British people and understand them. They don’t want people coming from all over the world into Britain, they don’t know anything about these people.”

Mr. Trump also claimed Mrs. May invited him to the UK twice this year during their meeting at the Swiss ski resort.

But Downing Street did not confirm the newspaper’s claim that an informal visit in July would be followed by a state visit in October.

A Number 10 source said: “An invitation has been extended and accepted and details will be set out in due course.”

Meanwhile, anxiety among Leavers that Brexit may be delivered “in name only” continued following Chancellor Philip Hammond’s remark on Thursday that the UK’s trade relations with the EU would change only “very modestly” after Brexit.

Mr. Hammond was rebuked by Number 10 but stoked Tory divisions further by saying the UK should seek a “middle way” in negotiations in order to maximize access to EU markets.

And former cabinet minister Iain Duncan Smith told the Sunday Express: “The Prime Minister cannot govern with Philip Hammond sniping from the sidelines. She has got a serious negotiation on and she does not need the Chancellor contradicting government policy. She needs to say to him: ‘You do that again and it will be your last comment as a cabinet minister’.”

Amid reports that Eurosceptics are also worried that Mrs. May was being bounced into a “soft Brexit” by civil servants as she lacks authority, a Number 10 source said: “The PM triggered Article 50, she set direction of the Brexit negotiations in her Lancaster House and Florence speeches and personally secured the deal that led to sufficient progress.

“David Davis has supported her at every step and they are both supported by a very able Civil Service team.”

The Leave Means Leave campaign has written to the PM urging her to “call the EU’s bluff” and accept a limited “off the shelf” Canada-style free trade deal.

In a letter signed by former chancellor Lord Lawson, former Brexit minister David Jones, and Labour Leave chair, John Mills, they said a deal like Canada’s would cover 98% of goods and 92% of agriculture and would remove the need for a “status quo” transition, so the UK could reap Brexit’s benefits from exit day in March 2019.