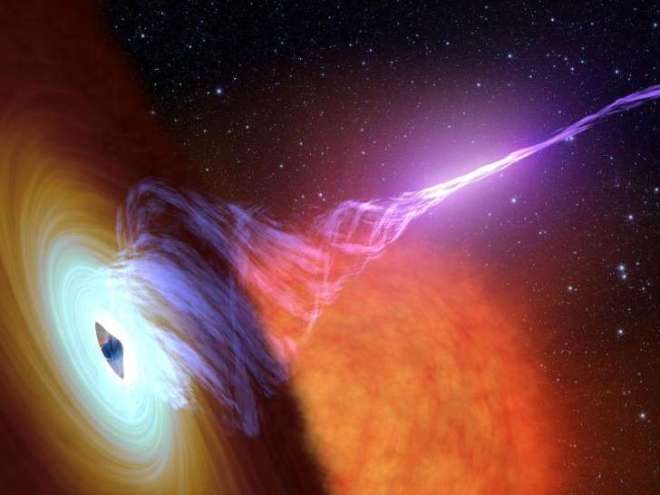 High-energy cosmic rays have captivated scientists since their discovery more than 50 years ago, but we’ve never known where they came from. Same goes for neutrinos and gamma rays. Now, new research suggests all three kinds of particles might originate at the same source: supermassive black hole jets.

Cosmic rays are the high-energy nuclei of space particles, according to the European Organization for Nuclear Research, more commonly known as CERN. They contain millions of times more energy than anything humans could manufacture in a particle accelerator, according to New Scientist.

Neutrinos are chargeless, basically massless subatomic particles whose properties make them difficult to detect despite the fact that they’re extraordinarily common throughout the universe, according to Scientific American. Gamma rays, meanwhile, are a kind of electromagnetic radiation, according to Live Science.

Researchers from the University of Maryland, Pennsylvania State University and Kyoto University became intrigued by the fact that neutrinos, gamma rays and cosmic rays all appeared to have comparable levels of energy, which seemed to indicate a shared bigger picture. Using numerical data from detectors like the Pierre Auger Observatory in Argentina, the IceCube neutrino observatory in Antarctica and the Telescope Array project, the team created a computational model of the path a cosmic ray takes from the middle of a galaxy cluster all the way to the detectors with which we measure them here on Earth. A paper describing the work was published in the scientific journal Nature Physics.

© Provided by IBT Media Cosmic rays are accelerated by powerful jets from a supermassive black hole. “Our model shows a way to understand why these three types of cosmic messenger particles have a surprisingly similar amount of power input into the universe,” co-author Kohta Murase, an astrophysicist at the University of Pennsylvania, said in a university press release. “It demonstrates that the similar energetics of the three cosmic messengers may not be a mere coincidence.”

The simulation is the first of its kind. It suggested that the particles get a boost from powerful plasma jets created by supermassive ​black holes, effectively turbo-charging them before they begin their journey to Earth. All kinds of matter in the path of the now-ultra-high energy cosmic rays can interact with them to create particles that ultimately decay into “daughter particles”—neutrinos and gamma rays—that inherit the energy of their “parent” particles. The simulated scenario the researchers created lined up with the known properties of all three particles. Still, the team will need to test it against other data, including from the IceCube, which studies high-energy neutrinos.

“This model paves a way to further attempts to establish a grand-unified model of how all three of these cosmic messengers are physically connected to each other,” Murase said in the press release. “However, there also are other possibilities.”