Hundreds of mourners gathered to pay tribute to the Cranberries singer Dolores O’Riordan on Tuesday as she was buried in her native Ballybricken, near the city of Limerick.

In the parish church where O’Riordan once sang in the local choir, Canon Liam McNamara said the number of people she had helped through her songs was “impossible to count” and that she rescued countless people from “the darkness of depression” with her music. 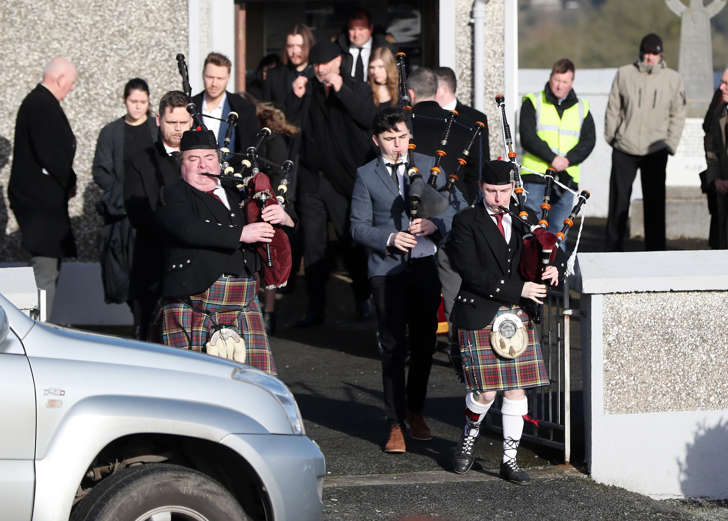 © Getty Pipers lead mourners following the funeral of The Cranberries singer Dolores O’Riordan at Saint Ailbe’s Church, Ballybricken. Her talents were used “generously for the benefit of others”, McNamara said of the pop star, who was found dead at a London hotel on 15 January.

Inside a packed Saint Ailbe’s Catholic Church in Ballybricken, Co Limerick, a service began with a recording of Ave Maria, sung by O’Riordan and Luciano Pavarotti.

During his homily, McNamara recalled his first encounter with the singer.

© PA Mourners sign a book of condolence at the funeral mass at Saint Ailbe’s Church. “My first meeting with her was in 1989. The memory is indelibly written on my mind.

There she is, sitting at the keyboard, playing and singing with the choir in this lovely church of Saint Ailbe… She possessed a very special singing voice – a talent worth its weight in gold. Intelligent girl that she was, she knew well that she should develop and use that talent.

She also knew the talents were given by almighty God to be used generously for the benefit of others.”

McNamara added: “No words are adequate to describe Dolores or to accurately state the influence for good she has been over the years.” 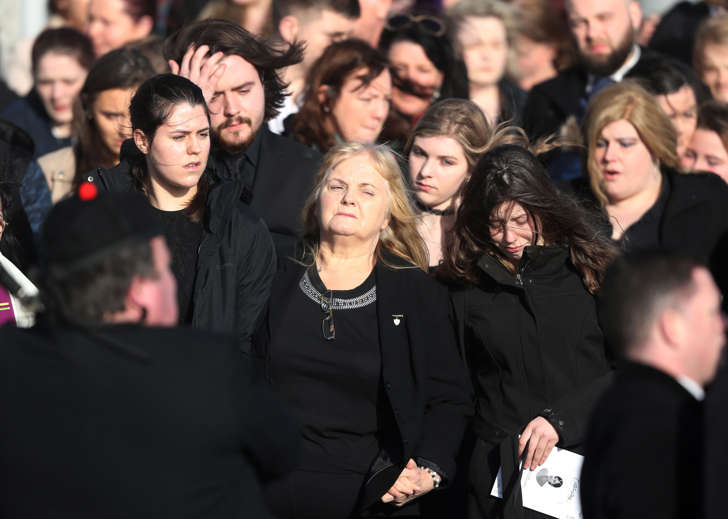 © Getty Eileen O’Riordan (centre) following the funeral of her daughter and The Cranberries singer Dolores O’Riordan at Saint Ailbe’s Church, Ballybricken. Paying tribute to the singer, the Catholic archbishop of Cashel and Emly in south-west Ireland, Kieran O’Reilly, said that on hearing the news of her death “many hearts in Ireland and around the world [were] heavy with sadness”.

O’Reilly said that after meeting the late Pope John Paul II, O’Riordan told an interviewer that her faith was one of her greatest musical influences.

Mourners at the requiem mass for the 46-year-old singer included her mother, Eileen and her three children – Taylor, Molly and Dakota. All the members of her band – Noel Hogan, Mike Hogan, Fergal Lawler – were also at the service.

At the end of the service, the Cranberries’ song When You’re Gone was played.

Remembering Dolores O’Riordan (1971-2018) of The Cranberries

Among those who had come to Limerick over the past 24 hours to pay tribute to O’Riordan was Ireland’s president Michael D Higgins.

Speaking before the funeral, Higgins said: “It’s so profoundly sad that someone so young is taken from us, but it’s equally important also to pay tribute to her work and music.

“It’s also to the incredible credit of all the who have appreciated the music and the songs and the performances and the band, that they have come out in such numbers to make their tribute.”

Among other Irish celebrities to pay tribute to O’Riordan was former Munster, Ireland and Lions rugby player Ronan O’Gara who said this would be a “tough day for the great people of a special city to me”.

O’Riordan was to be buried after the requiem mass in the local cemetery at Ballybricken at a private ceremony.