Theresa May has welcomed President Emmanuel Macron for summit talks which will see Britain commit tens of millions of pounds to strengthen UK border controls in France.

The French president, making his first visit to Britain since entering the Elysee Palace, was greeted at the Royal Military Academy, Sandhurst, with a guard of honour from the Coldstream Guards.

© Provided by The Press Association Prime Minister Theresa May and French President Emmanuel Macron view a guard of honour at the Royal Military Academy Sandhurst, ahead of UK-France summit talks (Stefan Rousseau/PA) Before the ceremonial welcome, the two leaders enjoyed a working lunch at the Royal Oak pub in Paley Street, in Mrs May’s Maidenhead constituency.

Officials said the £44.5 million cash injection would go towards fencing, CCTV and detection technology in Calais and other ports along the Channel.

Part of the money will also go towards helping relocate people away from Channel ports to prevent another migrant camp from forming as it did in Calais in 2015.

Britain could also commit to taking in a higher proportion of child refugees from France as part of its commitment to resettle 480 unaccompanied children under the Dubs scheme, it is understood. 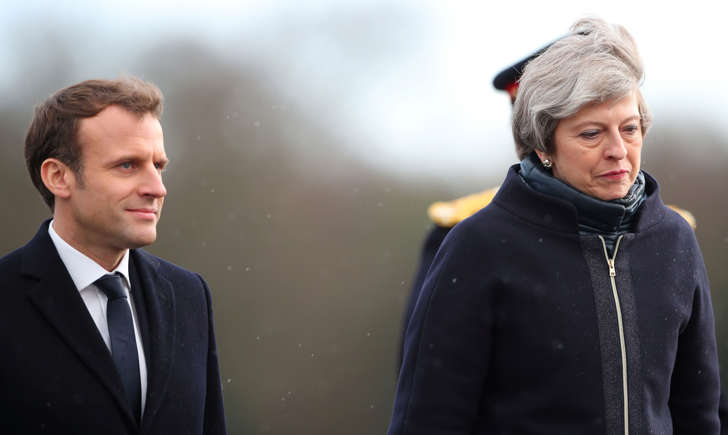 © Reuters France’s President Emmanuel Macron and Britain’s Prime Minister Theresa May inspect the troops at Sandhurst Military Academy in Sandhurst, Britain, January 18, 2018. Figures show more than 750 children have been transferred to Britain through various routes since the “Jungle” camp was shut down in 2016.

Mrs May’s official spokesman said on Wednesday: “We have given a clear commitment in relation to child refugees following the Dubs amendment.

“The work to identify unaccompanied minors in and around the Calais area continues and where it’s appropriate to find them homes in the UK we’re determined to do so.”

The French president has been pressing for Britain to increase its financial contribution as well as a commitment to take more refugees ahead of his first visit to the UK as president.

A Government spokeswoman said: “This is about investing in and enhancing the security of the UK border.

“Just as we invest in our borders around the rest of the UK, it is only right that we constantly monitor whether there is more we can be doing at the UK border controls in France and Belgium to ensure they are as secure as possible.”

The summit is also an opportunity for the two leaders to underline their countries’ enduring ties, despite Britain’s impending withdrawal from the EU.

Increasing co-operation on defence and counter-terrorism will be high on the agenda at an event which will see the first meeting together of the heads of the two countries’ main intelligence agencies.

The heads of MI5, MI6, GCHQ and France’s DGSE and DGSI will discuss how they can work together to counter threats such as the targeting of concert venues like Manchester Arena and the Bataclan in Paris, and terrorists using the internet as a “safe space”.

Britain will also commit to participating in Mr Macron’s “European intervention initiative”, which officials do not regard as a European army but a plan to enhance coordination of existing armed forces.

Three RAF Chinook helicopters and around 50 non-combat troops will be deployed to Mali to provide logistical support to French forces attempting to stabilise the Sahel region of Africa where extremists like Islamic State and al Qaida have gained a foothold. 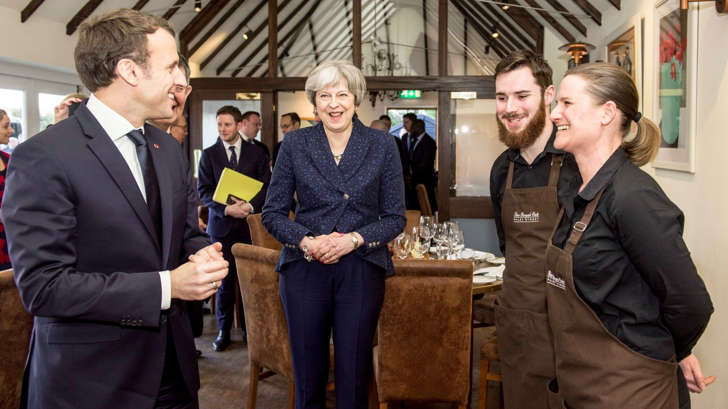 © Getty French President Emmanuel Macron (L) meets with British Prime Minister, Theresa May (C) during his official visit in Maidenhead, United Kingdom on January 18, 2018. The meeting will also be an opportunity to discuss what Mrs May has described as “very significant” proposals by the French to loan the Bayeux Tapestry to Britain, where it has never been displayed.

Mr Macron’s focus on border issues, however, was underlined by a visit to Calais on Tuesday when he vowed there would be no return of the infamous migrant “Jungle” tent city which was cleared by the authorities in 2016.

UK funding for security in the region is thought to have topped £100 million over the last three years, while more than 750 children have been transferred to Britain since the Jungle was shut down. 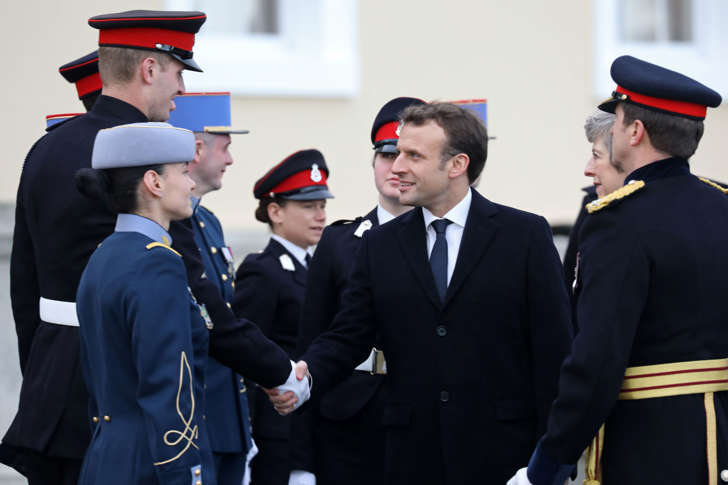 British officials said the new UK funding would build on previous security work in the area, pointing to figures showing illegal attempts to enter the UK fell from more than 80,000 in 2015 to just over 30,000 last year.

Up to 7,000 men, women and children lived in the Jungle in Calais before the site was cleared in 2016.

But hundreds of asylum seekers hoping to cross the Channel remain in the area, more than a year after authorities dismantled the sprawling site.

Officials said the new funding will also help relocate migrants away from Channel ports to stop another similar camp forming.