The parents of 13 siblings who were starved and chained to beds in California have been charged with torture and child endangerment.

David Allen Turpin, 57, and Louise Anna Turpin, 49, were arrested on Sunday after a 17-year-old emaciated girl escaped from their house in Perris, about 70 miles east of Los Angeles, and called the police.

The couple has been charged with nine counts of torture and 10 counts of child endangerment, the Riverside County Sheriff’s Office said.

Police said they found several of the couple’s 13 children, aged between two and 29, “shackled to their beds with chains and padlocks in dark and foul-smelling surroundings”.

“The victims appeared to be malnourished and very dirty,” a statement said.

Their parents are being held in a detention centre on $9m bail and are due to appear in court on Thursday, police said.

© Other The Turpin family Six of the children are minors, while the other seven are over 18, according to police.

David Turpin’s parents, James and Betty Turpin of West Virginia, told ABC News they are “surprised and shocked” by the allegations against their son and daughter-in-law, saying they cannot understand “any of this”.

Kimberley Milligan, 50, who lives opposite the family, said she had only seen the baby in its mother’s arms and three other children since she moved to the street two years ago.

© Other The Turpin family She described them as small and pale. “Why don’t we ever see the kids?” she said.

“In hindsight, we would have never thought this, but there were red flags. You never don’t hear or see nine kids.”

She said she was admiring Christmas lights in the neighbourhood two years ago and encountered three of the Turpin children and complimented them on the manger with a baby Jesus outside their house. 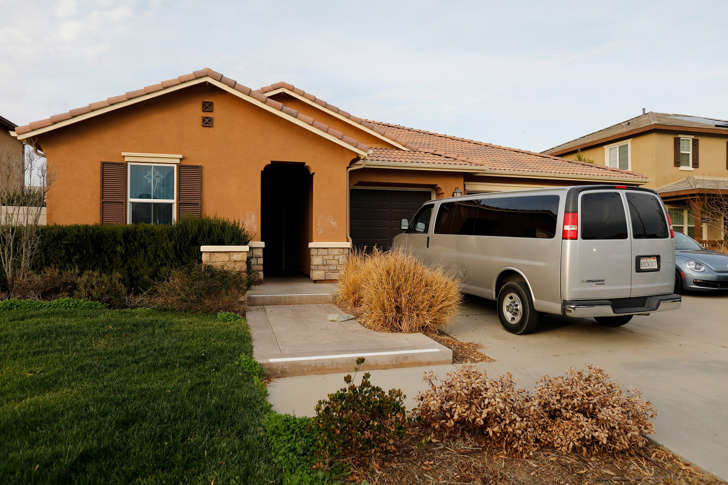 © Reuters The Turpins’ house The children froze as if doing so would make them invisible, she said.

She said: “20-year-olds never act like that. They didn’t want to have a social conversation.”

A Facebook account, which appears to belong to both the mother and father of the family, features a series of photographs of the 13 siblings during happier times.

In one photo the couple are pictured with their children in front of mountains. The family members, who are all wearing matching numbered “Thing” T-shirts from the Dr Seuss book The Cat In The Hat, are seen smiling and having a good time.

A spokeswoman for the NSPCC in the UK said: “This heartbreaking and shocking case in the US highlights yet again the plight of many neglected and mistreated children whose suffering goes on behind closed doors, leaving them feeling as though they have nowhere and no-one to turn to.

“With a record number of reports of neglect to the NSPCC Helpline last year in the UK, we know that more people are speaking up if they’re worried about a neighbour or someone they know .

“We would urge anyone worried about a child they know to pick up the phone, even if you are not sure, as you could help save that child’s life and get them the help they desperately need.”