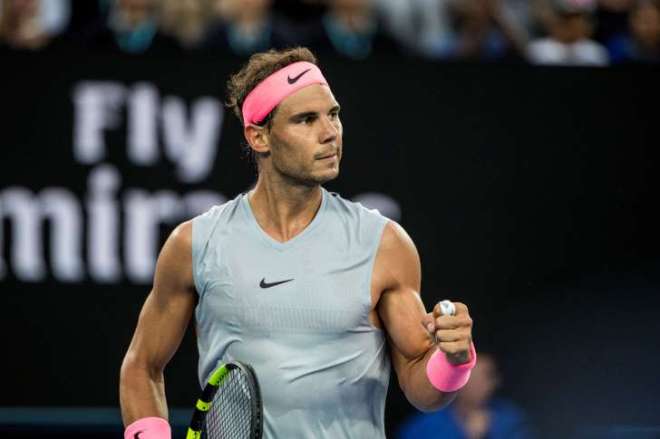 The world No 1, a beaten finalist in Melbourne last year, eased past his Dominican opponent 6-1 6-1 6-1 in one hour and 34 minutes on Rad Laver Arena in front of an expectant crowd.

Nadal, limited to a one-match exhibition at the Kooyong Classic as preparation for the season’s opening Grand Slam, secured his first competitive victory since an ATP Finals defeat to David Goffin to increase expectation of a first Australian title since 2009.

The Spanish 31-year-old, who will meet Leonardo Mayer in the second round, was never troubled by his opponent, securing eight service breaks and 28 winners in a trademark powerful display from the back of the court.

Nadal, targeting a 17th Grand Slam title, required no strapping to the right knee injury which hindered his performances at the end of last season.

“I’m very happy to be back, it’s a very important beginning for me. It’s good news for me,” he said.

“I want to enjoy every moment I’m here on this court.”

Home favourite Nick Kyrgios, who said he has had enough of having a “rollercoaster” ride in his career, began his charge for Grand Slam success with an assured 6-1 6-2 6-4 victory over Rogerio Dutra Silva.

The Australian world No 17, on the receiving end of a code violation for swearing at a spectator who he felt was making too much noise, continued his unbeaten start to the season, having won the Brisbane title, and will next meet Viktor Troicki, after the Serbian defeated Australian Alex Bolt 6-7(2) 4-6 6-2 6-3 6-4.

Grigor Dimitrov, ATP Finals champion, will hope to improve on his run to the semi-final last year and began well with a convincing 6-3 6-2 6-1 victory over qualifier Denis Novak while Marin Cilic was made to work hard for a 6-2 6-2 4-6 7-6(5) success over Canadian Vasek Pospisil.

Two of the sport’s most promising names for the future were in action at Melbourne Park and world No 50 Denis Shapovalov continued his upward trajectory in the men’s game with a 6-1 6-3 7-6(5) win.