As the Pentagon prepares to send another 1,000 military advisers to Afghanistan, several lawmakers have again taken up legislation that would give Congress more say in U.S. military decisions.

Senate Foreign Relations Chairman Bob Corker (R-Tenn.) said Thursday that his committee would soon debate and amend a bill for a new authorization for use of military force (AUMF). Corker had previously promised the action in October.

“I will say that there’s a lot of progress being made on the AUMF, and I think we’re going to be in a place, really soon, to have a markup,” Corker said at a hearing on the Trump administration’s strategy for Syria after the Islamic State in Iraq and Syria (ISIS) is defeated.

“We’re doing it in a way to engender support and input from members on both sides of the aisle.”

President Trump’s administration has continued to use a 2001 AUMF passed in the wake of the 9/11 terrorist attacks to justify a range of military actions, including the fight against ISIS.

A handful of lawmakers want the language revoked for a more tailored war authorization bill, arguing the current AUMF has reached far beyond what it was meant to allow.

Efforts to replace the AUMF over the years have stalled, however, amid party divisions over issues such as how long the authorization should last, what terrorist groups should be included and whether ground troops should be allowed.

But with the Pentagon sending more drones, vehicles and new combat advisers to Afghanistan as soon as February, lawmakers are making another effort to reconcile divisions and push for a new AUMF.

Jones, along with fellow committee member Rep. John Garamendi (D-Calif.), co-authored a bill that would force a debate and vote in Congress on a new AUMF for Afghanistan. But that effort has been met by an unmoving House GOP leadership. 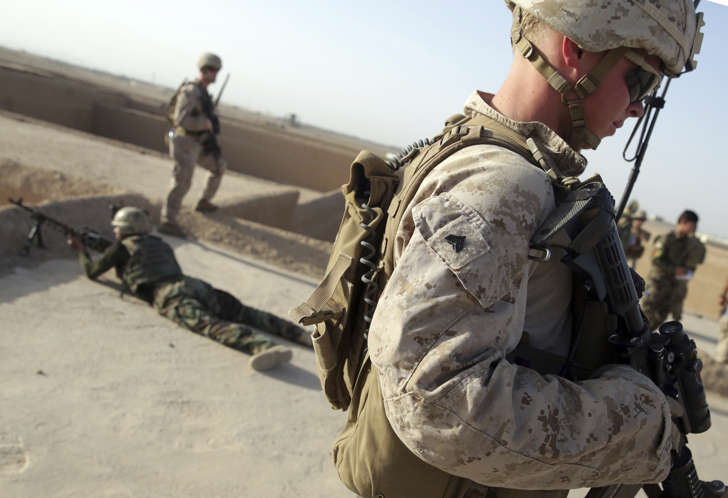 © Associated Press In this picture taken on Sunday, Aug. 27, 2017, U.S. Marines train Afghan army commandos in the Shorab military camp in Helmand province, Afghanistan. “The new announcement of another 1,000 troops may give us an opportunity to bring it back up,” Garamendi argued in a separate interview on Friday.

The authorization debate was kicked into high gear last June after Rep. Barbara Lee (D-Calif.) sought to sunset the 2001 AUMF and force a debate and vote on what she called “perpetual” U.S. wars.

That effort was blocked the following month by Speaker Paul Ryan (R-Wis.), who argued it was not right to end the current war authorization without a guaranteed replacement. But the move ignited a new argument on the issue.

“As far as I’m concerned, he has denied members of Congress their constitutional responsibility,” Jones said of Ryan. “We haven’t been able to get a policy debate on Afghanistan since 2001.”

The looming threat of North Korea and the October deaths of four U.S. service members in Niger – a country where many lawmakers were unaware the U.S. had active military operations – have only given air to calls for a new war authorization.

Jones expressed frustration at being unable to move his bill, which he and Garamendi sent to both the House Rules and the Foreign Affairs committees.

The North Carolina Republican said he spoke last month to Rules Committee Chairman Pete Sessions (R-Texas) about getting a hearing and would press him again in the next few weeks.

Jones and Garamendi have also explored putting together an unofficial hearing in February held by the minority party that would bring in veterans and constitutional lawyers to speak on the AUMF issue.

But Jones lamented that “it’s going to take the pressure of the American people, or some type of legal action” for their bill to move forward.

Garamendi said that lawmakers’ best chance at getting a new AUMF might be when the next National Defense Authorization Act comes to the floor.

“There’s a higher probability of getting an amendment to be voted on on the floor of the House of Representatives. But again, last year we were precluded from doing that,” Garamendi said.

In the Senate, Sens. Tim Kaine (D-Va.) and Jeff Flake (R-Ariz.) have also proposed a new war authorization that would cover use of force only against certain extremist groups and would expire after five years. The White House would need to ask Congress to add additional groups.

Kaine told Defense News that negotiations to shore up their bill with Corker’s ideas are ongoing. Kaine also said he will reach out to House lawmakers about their proposals once senators work out a compromise.