To any watching admirer, she makes it look easy. As with so much in the business of royalty, the reality is a little more laborious.

The Queen has given a rare glimpse into the perilous business of wearing the Crown Jewels, as she describes a crown so heavy she must keep her head lifted for fear of breaking her neck.

The Queen, who is to discuss her memories of her own Coronation in a BBC documentary, described the Imperial State Crown as “very unwieldy”, agreeing it was very heavy.

The crown, which was worn at the end of the Coronation and for most State Openings of Parliament since, was adapted slightly for her, following the death of her father.

“You see, it’s much smaller isn’t it?! the Queen says, gesturing to the height of the crown’s arches in scenes to be broadcast on BBC One on Sunday. “You know, it would have been up to about there when my father wore it.”

Alastair Bruce, an expert on the Crown Jewels who is in conversation with Her Majesty, added: “I mean it was huge then.”

“It’s difficult to always remember that diamonds are stones and so they’re very heavy,” said Bruce.

The Queen added: “Yes, fortunately my father and I have about the same sort of shaped head. But once you put it on it stays. I mean it just remains on.”

The discreet alteration to the Crown saw its arches lowered to create a smaller, more feminine object for the then-27-year-old Queen.

“You have to keep your head very still,” Bruce remarked, as the pair examined the Imperial State Crown and watched footage of the 1953 day.

“Yes,” the Queen agreed. “And you can’t look down to read the speech you have to take the speech up.

“Because if you did your neck would break, it would fall off.

“So there are some disadvantages to crowns, but otherwise they’re quite important things.”

The television programme also saw the Queen, who celebrates the 65th anniversary of her coronation later this year, speak of her mischievous children, a lost sceptre and a dress so heavy she got stuck on the carpet, in an unrivalled insight into events behind-the-scenes.

Bruce said the programme will show the Queen’s “most delightful sense of humour”, as she responds to his comments with twinkling eyes and deadpan delivery.

© Provided by The Telegraph At one point, she wonders aloud what she has done with her own sceptre after it disappears from the screen, and recalls how her heavy embroidered dress left her stuck when “going against the pile of the carpet…I couldn’t move at all.”

On a “horrible” carriage ride which saw her travel from Westminster Abbey back to the palace in the “not very comfortable” Gold State Coach not designed for long journeys, Bruce asked: “Were you in it for a long time though?”

The programme, a one-hour documentary which forms part of the Royal Collection series, also includes the Queen’s personal footage showing, a voiceover remarks, “a more informal mood behind the scenes”.

© Provided by The Telegraph One maid of honour is seen tripping, while the Queen giggles, and a young Prince Charles and Princess Anne play underneath her robe.

“Such fun for the children,” Bruce remarks.

“Not what they’re meant to do,” the Queen notes. Examining the Black Prince’s Ruby, part of the Imperial State Crown, she describes a small hole in the stone where Henry V is said to have worn his feather plume during the Battle of Agincourt in 1415.

“It’s fun to see I think,” she said. “Well the idea that his plume was put into the stone. On his helmet.

“Bit rash, but that was the sort of thing they did I suppose in those days.”

Handling the crown confidently, the Queen also pointed to four pearls hanging underneath the arches, two of which are believed to have belonged to Mary Queen of Scots and bought by her Elizabeth I.

“Most pearls like to be sort of living creatures so they’ve just been out, hanging out here for years, it’s rather sad. So they don’t look very happy.”

Laughing, the Queen replied: “Well, I’m afraid so. I mean, the trouble is that pearls are sort of live things, and they need, and they need warming.” 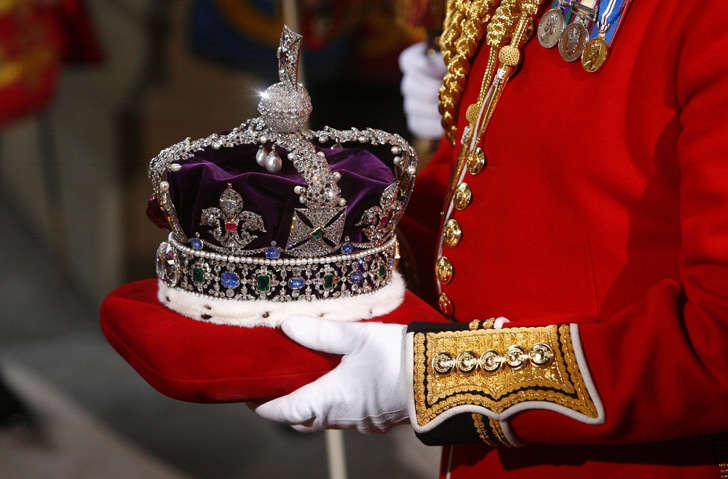 Speaking at a press screening for the programme, Bruce shared memories of his time with the Queen, disclosing: “She was very practical with the Crown Jewels in a way I wasn’t quite expecting.”

Describing how at one point she had grabbed the table the crown was resting on and dragged it closer without ceremony, he revealed: “She said ‘well, you know, it’s my crown’.”