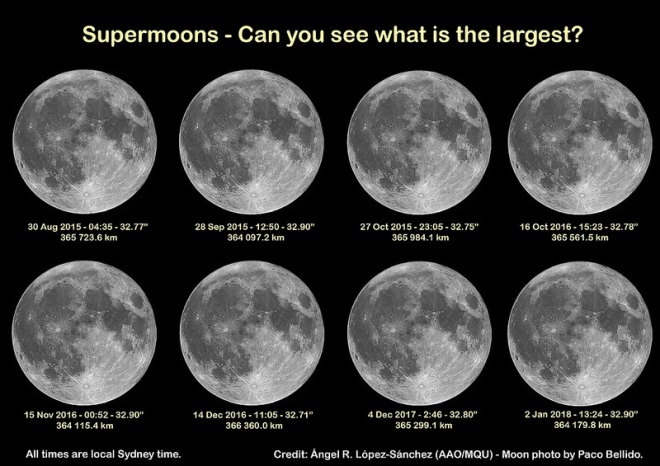 If skies are clear in Western Europe shortly before 22h UT (10pm GMT) on the first evening of 2018, be sure to glance up at the almost full Moon in the constellation of Gemini. If it seems a bit larger than usual then you’d be right, for at this time on 1 January the Moon is at its closest for the year, just 356,567 kilometres, or 221,560 miles away (measured between the centres of the Earth and Moon).

The circumstances of 2018’s closest Moon get a little more interesting a few hours later since full Moon occurs at 02:24 UT (2:24am GMT) on Tuesday, 2 January. The proximity of perigee and a full Moon, giving rise to a full Moon almost 8 percent larger than average on this occasion, is commonly called a supermoon (technically, a perigee-syzygy of the Earth–Moon–Sun system).

Observers in the UK receive something of a bonus for the lunar perigee on 1 January since it occurs when the Moon is above the horizon, hence we are on the lunar-facing hemisphere of the Earth and somewhat closer to it than the centre of our planet. Consequently, for someone in the heart of the British Isles, the perigee Moon’s centre lies 351,816 kilometres (218608 miles) away and measures 34 arcminutes in size — some 9 percent larger than average.

To summarise, Tuesday’s full Moon is the largest of the year and the next time you’ll see a larger one is on 25 November 2034 (calculated for the geocentre). And as an added bonus this month, a second full Moon falls on 31 January. The second full Moon in a given month is sometimes called a Blue Moon, but this one’s going to have a decidedly reddish hue for observers in western North America, Oceania, Russia, Asia, the Middle East, northern Scandinavia and Eastern Europe for it will be totally eclipsed by the Earth’s shadow!