BRUSSELS — Russian submarines have dramatically stepped up activity around undersea data cables in the North Atlantic, part of a more aggressive naval posture that has driven NATO to revive a Cold War-era command, according to senior military officials.

The apparent Russian focus on the cables, which provide Internet and other communications connections to North America and Europe, could give the Kremlin the power to sever or tap into vital data lines, the officials said. Russian submarine activity has increased to levels unseen since the Cold War, they said, sparking hunts in recent months for the elusive watercraft.

“We are now seeing Russian underwater activity in the vicinity of undersea cables that I don’t believe we have ever seen,” said U.S. Navy Rear Adm. Andrew Lennon, the commander of NATO’s submarine forces. “Russia is clearly taking an interest in NATO and NATO nations’ undersea infrastructure.”

© Alvarad/Epa-Efe/Rex/Shutterstock/Alvarad/Epa-Efe/Rex/Shutterstock British Air Chief Marshal Stuart Peach addresses the media in Madrid in November. He has warned that Russian submarines threaten transatlantic cables vital to the internet. NATO has responded with plans to reestablish a command post, shuttered after the Cold War, to help secure the North Atlantic. NATO allies are also rushing to boost anti-submarine warfare capabilities and to develop advanced submarine- ­detecting planes.

Britain’s top military commander also warned that Russia could imperil the cables that form the backbone of the modern global economy. The privately owned lines, laid along the some of the same corridors as the first transatlantic telegraph wire in 1858, carry nearly all of the communications on the Internet, facilitating trillions of dollars of daily trade. If severed, they could snarl the Web. If tapped, they could give Russia a valuable picture of the tide of the world’s Internet traffic.

“It’s a pattern of activity, and it’s a vulnerability,” said British Air Chief Marshal Stuart Peach, in an interview. 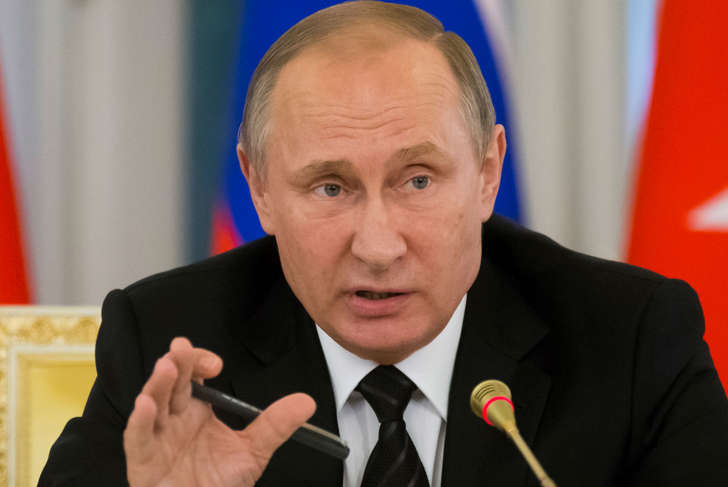 © AP Images Russia uses Iran base to bomb targets in Syria “Can you imagine a scenario where those cables are cut or disrupted, which would immediately and potentially catastrophically affect both our economy and other ways of living if they were disrupted?” Peach said in a speech in London this month.

The Russian Defense Ministry did not respond to a request for comment about the cables.

The Russian sea activity comes as the Kremlin has also pressed against NATO in the air and on land. Russian jets routinely clip NATO airspace in the Baltics, and troops drilled near NATO territory in September.

Russia has moved to modernize its once-decrepit Soviet-era fleet of submarines, bringing online or overhauling 13 craft since 2014. That pace, coming after Russia’s annexation of Ukraine’s Crimean peninsula set off a new era of confrontation with the West, has spurred NATO efforts to counter them. Russia has about 60 full-size submarines, while the United States has 66.

“They can do oceanographic research, underwater intelligence gathering,” he said. “And what we have observed is an increased activity of that in the vicinity of undersea cables. We know that these auxiliary submarines are designed to work on the ocean floor, and they’re transported by the mother ship, and we believe they may be equipped to manipulate objects on the ocean floor.”

That capability could give Russia the ability to sever the cables or tap into them. The insulated fiber-optic cables are fragile, and ships have damaged them accidentally by dragging their anchors along the seabed. That damage happens near the shore, where it is relatively easy to fix, not in the deeper Atlantic, where the cost of mischief could be far greater.

Lennon declined to say whether NATO believes Russia has actually touched the cables. Russian military leaders have acknowledged that the Kremlin is active undersea at levels not seen since the end of the Cold War, when Russia was forced to curtail its submarine program in the face of economic turmoil and disorganization.

“Last year we reached the same level as before the post-Soviet period, in terms of running hours,” said Adm. Vladimir Korolev, the commander of the Russian Navy, earlier this year. “This is more than 3,000 days at sea for the Russian submarine fleet. This is an excellent sign.”

The activity has forced a revival of Western sub-hunting skills that lay largely dormant since the end of the Cold War. Lennon said NATO allies have long practiced submarine-hunting. But until the last few years, there were few practical needs for close tracking, military officials said.

In recent months, the U.S. Navy has flown sorties in the areas where Russia is known to operate its submarines, according to aircraft trackers that use publicly available transponder data. On Thursday, for example, one of the planes shot off from Naval Air Station Sigonella in Sicily, headed eastward into the Mediterranean. It flew the same mission a day earlier.

The trackers have captured at least 10 missions carried out by U.S. submarine-tracking planes this month, excluding trips when the planes simply appeared to be in transit from one base to another. November was even busier, with at least 17 missions captured by the trackers.

NATO does not comment on specific submarine-tracking flights and declined to release data, citing the classified nature of the missions. But NATO officials say that their submarine-tracking activities have significantly increased in the region.

Submarines are particularly potent war-fighting craft because they can generally only be heard, not seen, underwater. They can serve as a retaliatory strike force in case of nuclear war, threaten military resupply efforts and expand the range of conventional firepower available for use in ­lower-level conflicts.

The vessels are a good fit for the Kremlin’s strategy of making do with less than its rivals, analysts say: Russia’s foes need vast resources to track a single undersea craft, making the submarines’ cost-to-mischief ratio attractive. Even as Russia remains a vastly weaker military force than NATO, the Kremlin has been able to pack an outsize punch in its confrontation with the West through the seizure of Crimea, support for the Syrian regime and, according to U.S. intelligence, its attempts to influence the U.S. election.

“You go off and you try to add expense for anything that we’re doing, or you put things at risk that are of value to us, and submarines give them the capability to do it,” a senior NATO official said of the Russian approach, speaking on the condition of anonymity to discuss sensitive intelligence assessments.

Russian military planners can say, “I can build fewer of them, I can have better quality, and I can put at risk and challenge and make it difficult for NATO,” the official said.

Still, some analysts say the threat to cables may be overblown.

“Arguably, the Russians wouldn’t be doing their jobs if they couldn’t threaten underwater cables. Certainly, NATO allies would not be doing theirs if they were unable to counter that,” said Adam Thomson, a former British ambassador to NATO.

Russian military planners have publicized their repeated use of submarine-launched Kalibr cruise missiles during their incursion into Syria, which began in fall 2015. (In Syria, the missiles have not always hit their targets, according to U.S. intelligence officials, undermining somewhat the Russian claims of potency.)

NATO’s hunts — which have stretched across the Baltic, Mediterranean and Atlantic — have mobilized submarine-tracking frigates, sonar-equipped P8 Poseidon planes and helicopters, and attack submarines that have combed the seas.

“The Russians are operating all over the Atlantic,” said NATO Secretary General Jens Stoltenberg. “They are also operating closer to our shores.”

Russia’s enhanced submarine powers give urgency to NATO’s new efforts to ensure that it can get forces to the battlefront if there is a conflict, Stoltenberg said. In addition to the new Atlantic-focused command, the alliance also plans to create another command dedicated to enabling military forces to travel quickly across Europe.

NATO defense ministers approved the creation of the commands at a November meeting. Further details are expected in February. The plans are still being negotiated, but they currently include the North Atlantic command being embedded inside the U.S. Fleet Forces Command in Norfolk, which would transform into a broader NATO joint force command if there was a conflict, a NATO diplomat said, speaking on the condition of anonymity to discuss plans that have not been finalized.

“Credible deterrence is linked to credible reinforcement capabilities,” Stoltenberg said. “We’re a transatlantic alliance. You need to be able to cross the Atlantic.”