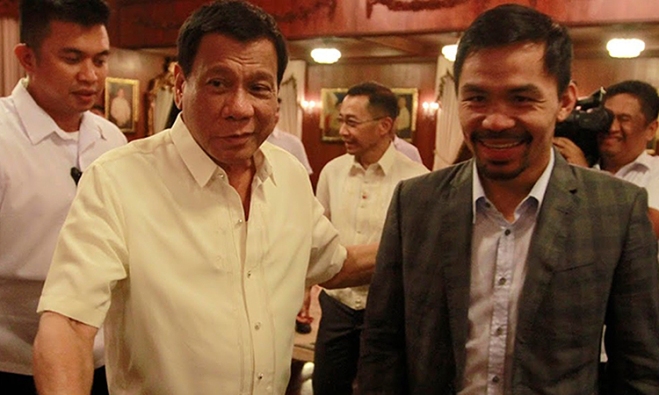 What else is there to achieve for father, successful athlete, former congressman, and current senator Manny Pacquiao? Philippine President Rodrigo Duterte thinks he should run for president in 2022.

Duterte proposed the idea in a speech during the boxer’s 39th birthday party in General Santos City last Sunday.

“Once, when we were talking privately, I told him ‘I want to make you president.’ I know he can do it,” the president said about Pacquiao.

We don’t know if he’s joking but for now, it looks like Duterte is more than happy for Pacquiao to become his successor.

Pacquiao’s political career may seem like a leap from his background as a boxer but for the Philippines, which has had a number of former actors and athletes become mayors, senators, and even a president, it is not at all surprising.

And while many have questioned whether or not Pacquiao — who dropped out of high school and earned his diploma through an equivalency exam in 2007 — is fit for politics, don’t be surprised if Pacquiao will follow through with Duterte’s advice.

Pacquiao first ran for public office in 2007 as a representative of South Cotabato’s 1st district but lost. He eventually became the representative of Sarangani province during the 2010 elections, a post he held for two terms. He was elected senator last year after becoming the 7th most voted out of the 12 seats.

He did not run under Duterte’s slate last year but has expressed support for the president since becoming a senator. As a public official, Pacquiao has pushed an ultra-conservative policy agenda, like advocating for the re-imposition of the death penalty and lobbying  against same-sex marriage.

The post President Pacquiao? Duterte says he’s all for it appeared first on Coconuts.