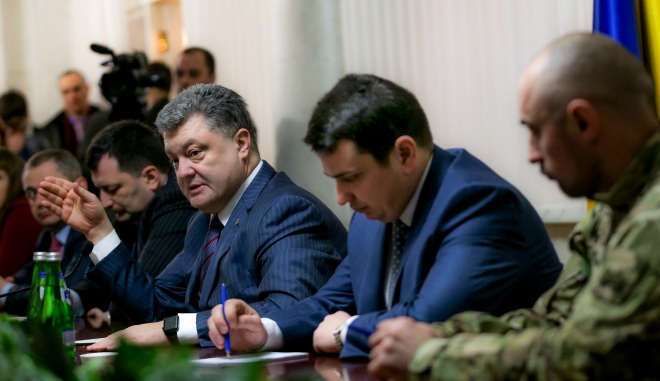 She said in a statement the pair had agreed on the need to maintain the independence and “enhance the operational capacity” of the anti-graft institutions: the National Anti-Corruption Bureau (NABU) and the Special Anti-Corruption Prosecutor’s Office (SAPO).

“We also agreed that the prompt establishment of the anti-corruption court is an essential complement of these efforts.

“In this regard, I supported the president’s agenda for the submission of a draft law to parliament in the coming days consistent with the Venice Commission’s recommendations and past agreements under the IMF-supported programme,” she said.

“It will be important that all members of parliament unite behind the bill and approve it as a matter of priority.”

Prior to the meeting with the president, Lagarde said the Ukrainian authorities and parliament should safeguard the independence of NABU and SAPO.

Lagarde said: “Fighting corruption is a key demand of the Ukrainian society, is crucial to achieving stronger and equitable growth, and is part of the government’s commitment under the programme with the IMF.”

The IMF and the World Bank were among the largest financial contributors in the $40bn bailout package given to the country to reform its economy after the Kremlin-backed president, Viktor Yanukovich, was ousted in 2014.

Ukraine’s financial backers have raised particular concerns about recent actions by prosecutors that they say threaten the independent status of the anti-corruption bureau.

A World Bank statement said: “It’s critical [Ukrainian authorities] have the legislative framework and resources to fulfil their mandate.”

Poroshenko urged parliament to prepare a draft law to set up the anti-corruption court. However, he said if no progress was made, he would prepare the legislation himself.

A bill allowing the Ukrainian parliament to dismiss the heads of NABU, SAPO and the National Agency on Corruption Prevention (NAZK) had been removed from the parliament’s agenda, it was revealed yesterday when an MP posted on his Facebook page.

Lagarde said: “We are deeply concerned by recent events in Ukraine that could roll back progress that has been made in setting up independent institutions to tackle high-level corruption.”

The US and the UK also said this week that they were concerned about pressure on the country’s anti-corruption bodies.