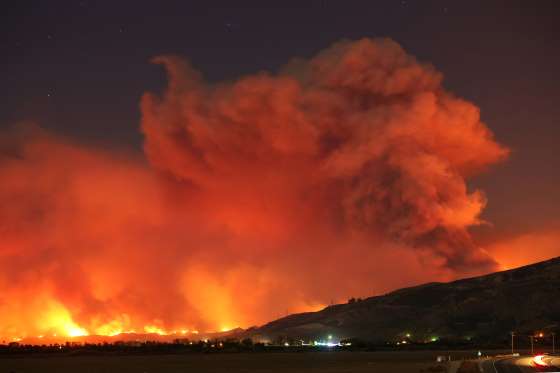 The largest of the fires spread across more than 200 square miles by Friday morning and crept toward the college town of Santa Barbara, while a new blaze in San Diego County grew quickly and dangerously, forcing a new round of evacuations.

These dangers came as firefighters confronted a half-dozen blazes across the region, fires that imperiled communities and homes, burned through streets and roared over mountains, forcing many to flee and leaving them with no idea when they could return home or if they would have anything to return to. Hundreds of buildings were destroyed and thousands more remained in danger, officials said.

The San Diego County blaze, dubbed the Lilac Fire, started Thursday morning and grew to more than 4,000 acres by that night. Ron Lane, the county’s deputy chief administrative officer, said it had never experienced December winds like these before.

The Lilac blaze destroyed at least 20 buildings, and three people suffered burns, according to county officials. Another person was injured by smoke inhalation, while two firefighters combating the blaze were injured. Authorities ordered a wave of evacuations and said more could follow.

“We are nowhere near the end of this,” Lane said. “There are thousands of homes that are within the path of these fires.”

President Trump on Friday declared an emergency in California and ordered federal aid to the state in response to a request from Gov. Jerry Brown (D), who had declared states of emergencies in four counties amid the fires. Hundreds of schools were shuttered across the region, some transforming into shelters to house people who fled their homes.

Forecasts said the most severe winds that have whipped up and moved the blazes would ease Friday and Saturday, lessening the fire danger some. But the National Weather Service cautioned that the risk of fires will stay elevated through Sunday as conditions remain abnormally dry and breezy.

Veteran firefighters said the blazes across the region, which come just months after another wave of wildfires rampaged through Northern California’s wine country, are unlike anything they have ever encountered.

There were some positive signs as the blazes persisted. Authorities had not reported any deaths due to the fires by Thursday. In Los Angeles, where three separate fires had burned homes across the city and county, leading to evacuation orders for more than 100,000 people, officials said the majority of residents who had fled would be allowed to return to their homes.

Mayor Eric Garcetti (D) cautioned that it was “still an insecure time” and warned that high winds could pick up again at any time. Los Angeles Fire Department Chief Ralph Terrazas said the forecast of the city’s weather and humidity conditions for Friday still put it in the “extreme range” of fire risk.

The Creek Fire, the largest blaze threatening that area, had grown to more than 15,000 acres by Thursday evening and it was 20 percent contained, officials said. That fire had destroyed more than 60 structures, half of them homes, and still threatened another 2,500 other buildings.

All around the region, people encountered nightmarish conditions as flames seemed to come from everywhere. Patricia Hampton, 48, said she and her boyfriend woke up at her house in Ventura on Tuesday night to the sound of helicopters. Outside, the ground was covered in ash, the air so smoky it was hard to breathe as they hopped on bicycles and tried to flee.

“We didn’t know what had happened. We rode down into town trying to make sense of what we were seeing — police everywhere, firetrucks, helicopters,” she said at a temporary shelter at the Ventura County Fairgrounds. “It was like a war zone. You could hear transformers blowing up.”

“The fire continues to burn actively with long range spotting when pushed by winds,” officials said in an alert posted online Friday morning.

Officials warned that even as the powerful Santa Ana winds weakened, they posed a new risk: an element of unpredictability, particularly dangerous for those fighting the blaze.

The local firefighters confronting the blazes were joined by many who flocked in from out of state as reinforcements, navigating new and unfamiliar terrain as they stepped in to help.

“You had to chew the air before you breathed it,” said Shane Nollsch, who had traveled from Lyon County, Nev., on Wednesday to help fight the fires.

The Thomas Fire covered a massive swath of terrain in Ventura County, edging up against Carpinteria, a city of 13,000 people just down Highway 101 from Santa Barbara. Officials issued voluntary and mandatory evacuation orders for different parts of the town on Thursday night and said the fire was inching closer to Santa Barbara.

Further down the 101, La Conchita, a tiny town, was also threatened by flames on Thursday. Fire crews managed to keep the blaze from the town’s edge, but new lines, fanned by offshore winds, remained a peril.

Fred Burris, a Ventura County Fire Department battalion chief, was finishing a 24-hour shift that included helping to protect La Conchita. New fire lines kept popping up Thursday along a 15-mile stretch of Highway 150 that came inland from Carpinteria toward Ojai, a popular vacation getaway set inland that is home to about 8,000 people, officials said.

“Everyone says, ‘Yeah, this is the worst,’ but it really is the high-water mark for me,” said Burris, a 36-year veteran of the department. “We’ve never seen a fire with this much speed and range.”

Along Rincon Mountain Road a few miles south of Carpinteria, fire crews fought several lines of flames throughout Thursday, focused on protecting homes and ranches. A dozen Ventura County fire engines staged along the road near midday, the fire burning in the avocado and citrus orchards along the ridgeline above.

The California National Guard said it has mobilized more than 1,300 personnel to help confront the wildfires.

Many of those who fled left in a hurry. People took what they could and rushed out, some bringing little more than backpacks or the clothes they were wearing. Deborah Moore, who evacuated to a shelter in Los Angeles, her husband and son had checked on their home, which was damaged but still standing.

Ivonna Ferrea, 52, of the Sylmar area, said she grabbed her passport, birth certificate and some money, but little else. She got out safely but has no idea what she will find when shed is allowed to return.

“It’s difficult,” Ferrea said. “I don’t know anything about my home.”

Berman and Rosenberg reported from Washington. Noah Smith in Los Angeles; Soo Youn in Ventura, Calif.; and Jason Samenow in Washington contributed to this report, which was first published at 8:03 a.m. Friday and will be updated throughout the day.